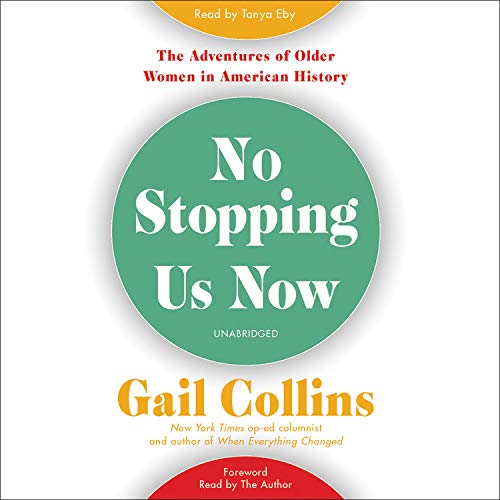 No Stopping Us Now

The beloved New York Times columnist "inspires women to embrace aging and look at it with a new sense of hope" in this lively, fascinating, eye-opening look at women and aging in America (Parade Magazine).

"You're not getting older, you're getting better," or so promised the famous 1970's ad - for women's hair dye. Americans have always had a complicated relationship with aging: embrace it, deny it, defer it - and women have been on the front lines of the battle, willingly or not.

In her lively social history of American women and aging, acclaimed New York Times columnist Gail Collins illustrates the ways in which age is an arbitrary concept that has swung back and forth over the centuries. From Plymouth Rock (when a woman was considered marriageable if "civil and under fifty years of age"), to a few generations later, when they were quietly retired to elderdom once they had passed the optimum age for reproduction, to recent decades when freedom from striving in the workplace and caretaking at home is often celebrated, to the first female nominee for president, American attitudes towards age have been a moving target. Gail Collins gives women reason to expect the best of their golden years.

"Gail Collins is such a delicious writer, it's easy to forget the scope of her scholarship in this remarkable look at women's progress." (People)

"A lively and well-researched compendium... This enjoyable and informative historical survey will delight Collins's fans and bring in some new ones." (Publishers Weekly)

"Gail Collins has an unflaggingly intelligent conversational style that gives this book a personal and authoritative tone all at once." (Cathleen Schine, The New York Review of Books)

What listeners say about No Stopping Us Now

I'm 76 years old. this book is amazing to learn somethings, remember other things in my life time. someparts make you laugh out loud. others remind you how far we've come and yet still many things to do. good book

Fantastic pastiche of many, many, interwoven short stories illustrating the era through the actions and attitudes towards 'older' women in the United States. I kept falling asleep and having to re-list to chapters because the singular voice-sound. Difficult to hold a mental plot of the evolution, beyond the impact of each story, but so well worth listening to the stories