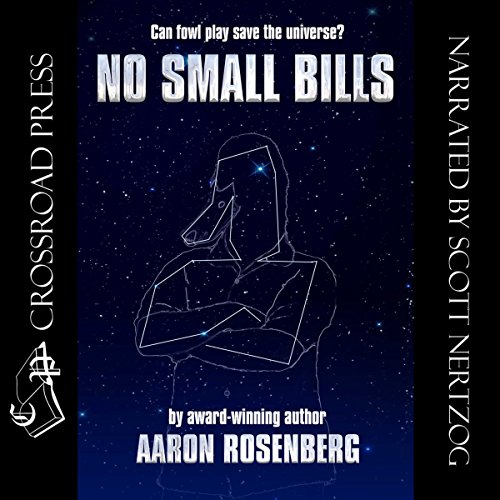 By: Aaron Rosenberg
Narrated by: Scott Hertzog
Try for $0.00

DuckBob Spinowitz has a problem. It isn't the fact that he has the head of a duck - the abduction was years ago and he's learned to live with it. But now those same aliens are back, and they claim they need his help! Apparently creatures from another reality are invading the universe, and only DuckBob can reset the device that maintains the barrier between dimensions. He reluctantly agrees to help, but how can a man whose only talents are bird calls and bad jokes, and whose only work experience is punching random buttons on a computer in a standard cubicle, be expected to save the universe?

No Small Bills is the hilarious new science fiction novel from award-winning, best-selling author Aaron Rosenberg, who has written books for Eureka, Star Trek, WarCraft, and many others, and is also the author of the rousing Dread Remora space-opera series for Crossroad Press.

What listeners say about No Small Bills

If you are looking for a comical listen this book is for you....well worth the time the story and narration was great!