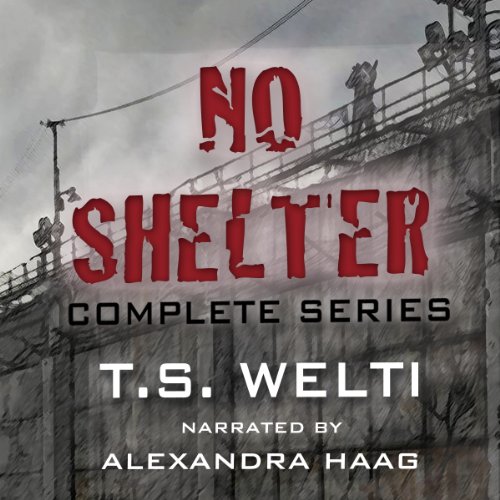 The No Shelter Trilogy is a postapocalyptic love story.

No Shelter, Book One

When the environment is ravaged by rising sea levels and monstrous storms, America is divided and survival becomes more precious than love. When 17-year-old Nada and Isaac stumble upon a handsome stranger in the woods, their cozy alliance and romance begin to unravel. This stranger promises Nada the impossible, in exchange for helping him rescue his sister from a prison in the last corner of civilization in the western United States. But this rescue operation is wrought with complications, including the fact that the girl they are supposed to save is the ex-President's daughter. This mission puts everyone's life at risk, especially Isaac - the one person who has always been there for Nada. Now Nada and her small tribe must choose between a somewhat comfortable existence in the mountains and the chance at a life free of fear and starvation.

After a harrowing rescue and escape, Nada sets off to rescue Isaac from the prison where she was forced to abandon him. During this long journey, Nada's feelings for Daedric intensify... until they discover Isaac roaming the mountains north of the Salton Sea - and he's not alone. Isaac is accompanied by a mysterious and beautiful girl, a fellow prisoner who was also set free by the Guardians. Nada is conflicted about how she will fit into their tribe, and how she factors into Isaac's past. Meanwhile, Isaac must decide whether to ditch everyone for their own good or stay true to his promise to Nada to "never give up".

After their haven in the woods is compromised, Nada and her tribe must decide whether they want to hike all the way from California to Washington, D.C., in the dead of winter with the Guardians on their tail. Nada isn't certain she wants to spend the rest of her life living in an underground shelter with Isaac, even if it means living comfortably and free of fear. Nada thinks this is the most difficult decision she has ever had to make until an even more difficult decision presents itself. Will love or shelter conquer all?

So disappointing, the ending is very abrupt

What a horrible story... Not redeeming in any way. Nothing to learn here either. Very disappointed