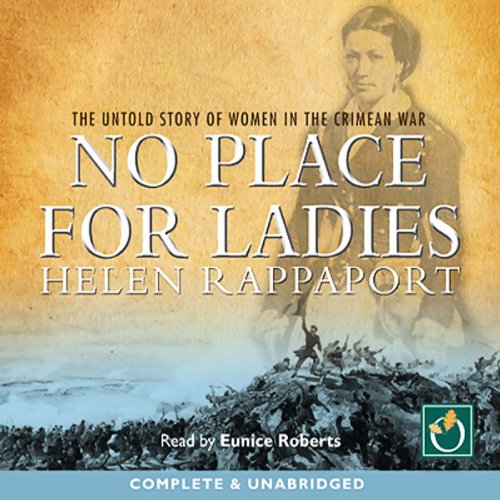 No Place for Ladies

By: Helen Rappaport
Narrated by: Eunice Roberts
Try for $0.00

On 23 February 1854, the Scots Fusilier Guards marched past Buckingham Palace resplendent in full regalia en route to the Crimea, as Queen Victoria bowed and waved proudly from the balcony.

Day after day, there were anxious farewells as husbands, sons, and fathers set off to war, leaving their women to face a bleak and uncertain future. Schoolchildren learn the story of Florence Nightingale who heroically tended the sick during the Crimean War. But she was not the only woman to play her part.

Numerous women from all social classes were actively engaged in the war, often in the most surprising ways. Based on dozens of rare and often unpublished accounts, No Place for Ladies is a rich, colourful and fascinating picture of very different women at war.

What listeners say about No Place for Ladies

A good book wrecked by the reading

This is a good book. It got wonderful reviews and I've now tried reading a bit of it and would agree. But I can't stand the reader of this audiobook and had to give in. I had to turn down the volume as soon as she started: she declaims as though trying to reach the back of a hall. Delivery is slow, with every comma and quotation marked by a significant pause. Important words are similarly picked out. I tried turning up the speed of the reading, which gave some relief, but not enough. This reader is obsessed by structure to the detriment of content. Dreadful. Listen to the extract before buying.

I agree wholheartedly with the first reviewer. I have listened to a large number of unabridged audio books and occasionally there is a mispronounced word or stress on the wrong part of a sentence, but in this case it is RIDDLED with to my mind incorrect stresses. Her voice is good, but not the reading of it. I have been so infuriated with it that I find getting the true meaning very difficult and I am re-reading it in my head as she speaks!! I'm suprised that the publishers accepted it for publication!
The actual book is indeed great, but as I have said it is very difficult to winkle out the true meaning!!

I agree with the other reviews. The subject is absorbing but the quality of the narration is so bad that I can't understand how it was ever released. The only reason I got to the end of this recording is because I kept hoping it would get better - it didn't.