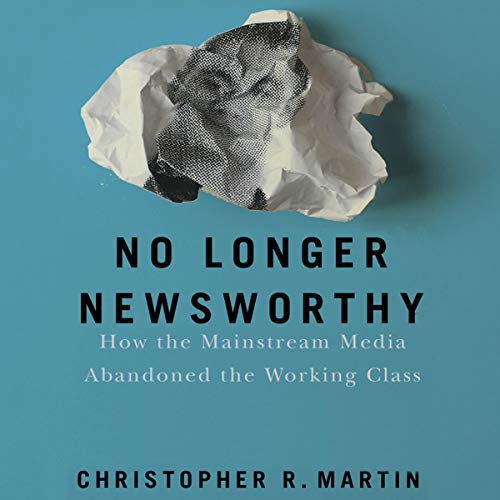 By: Christopher R. Martin
Narrated by: Frank Gerard
Try for $0.00

Until the recent political shift pushed workers back into the media spotlight, the mainstream media had largely ignored this significant part of American society in favor of the moneyed "upscale" consumer for more than four decades. Christopher R. Martin now reveals why and how the media lost sight of the American working class and the effects of it doing so.

The damning indictment of the mainstream media that flows through No Longer Newsworthy is a wakeup call about the critical role of the media in telling news stories about labor unions, workers, and working-class listeners. As Martin charts the decline of labor reporting from the late 1960s onwards, he reveals the shift in news coverage as the mainstream media abandoned labor in favor of consumer and business interests. When newspapers, especially, wrote off working-class readers as useless for their business model, the American worker became invisible. In No Longer Newsworthy, Martin covers this shift in focus, the loss of political voice for the working class, and the emergence of a more conservative media in the form of Christian television, talk radio, Fox News, and conservative websites.

Now, with our fractured society and news media, Martin offers the mainstream media recommendations for how to push back against right-wing media and once again embrace the working class as critical to its audience and its democratic function.

"A must-read for anyone concerned with the state of America in the age of Trump. This is a fabulous book…" (Robert McChesney, University of Illinois at Urbana-Champaign)

What listeners say about No Longer Newsworthy

Worth the time to read

I received this book for free, but this review is left of my own accord.

First off, Im probably right-center poltically. Libertarian-ish. So know that when I say "I dinged this a star because I almost didnt make it past the first ten minutes of this book because all it did in that time was talk about Trump and that's not what I wanted to read" I dont say that as someone who supports Trump. I really dislike the guy and I didnt vote for him. I just also really dislike Hillary. I say that as someone who thinks the introduction of the book should probably be redone to have less complaining about Trump since he isnt the focus of the book.
IF YOU ARE A TRUMP SUPPORTER and get discouraged by the first 10ish minutes, keep going. The rest of the book is worth the time it takes to read it. And it isnt all about Trump. In fact, every President (and several hopefuls) from Kennedy on get some attention.
I dinged the performance 2 stars because this book has at least a half dozen spots where the text just stops suddenly before picking up again. Sometimes the narrator repeats himself in those spots, sometimes he just carries on. Either way, it's something that should have been caught and edited out.

As for the actual content of the book, I found it more interesting than I thought I would. And while the author gives information regarding his own life which leads me to believe I probably wouldnt agree with him on a great many things, he does a good job presenting his topic here. As a Christian, straight, white, male millennial, I found this quite interesting and will be recommending it to several people.

An Expose' on Mainstream Media's Losing It's Way

More a text book on the media's history as compared to my expectation of a castigation of the "lame stream media" or "fake news." Mr. Martin presents a balanced case of the media abandoning the working class and literally "selling out" or "getting into bed with big business" - albeit in an academic style.
I will criticize narrator Frank Gerard for his biased tone in his performance when he delivers quotes from conservative or Republican personalities. His President Trump impersonations were the worst and detracted from taking the point that the author was making seriously.
I had to work at finishing the book to the end as the text book style got tiresome but i found it worth the effort.