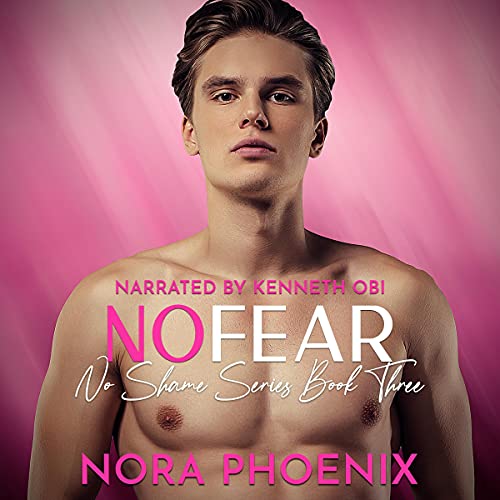 By: Nora Phoenix
Narrated by: Kenneth Obi
Try for $0.00

At least he’s out as gay, but all that has brought him is more confusion. He feels like a freak who doesn’t fit in anywhere. Even his own brother doesn’t want anything to do with him.

Sexy jiu jitsu teacher Blake makes Aaron feel things he’s never felt before. Things in his body. Things in his heart. Things he didn’t even know he craved, like being cared for, having decisions made for him.

But Blake doesn’t want a relationship, so how can he want Aaron?

No Fear is a steamy gay romance with mild puppy play elements. It’s the third book in the No Shame Series that needs to be listened to in order. Please note the trigger warnings in the front of the book.

What listeners say about No Fear

Holy cow! this was so good!

Is 5 all the Meows I can have? This deserves many more! You do need to read or listen to this in order for full enjoyment so start with No Filter, No Limits then-No Fear.
This Aaron (Josh’s brother) and Blake’s (Indy’s Karate professor) story, but we get so, so much more. You have this budding romance, the conflict between Aaron and Josh and Indy’s ongoing storyline as well (You have to read book one to see what that is, I won't spoil it for you.) so now we have three relationships, and several storylines, lots of twists, drama, suspense and of course sex.
Sound good? Trust me it is if you like mild BDSM, Dom/sub, hurt/comfort, wounded men, PTSD, Army snipers, medics, FBI agents and hot man-sex with very good, fast-paced plots. Now if you’re not sure about the BDSM…Dom/sub stuff this is a good start for it. It is well written, focused on the characters and relationships and overall just well done and easy to read.
I also recommend listening to the audio if possible. Kenneth Obi gives each character a voice and life of its own (Indy two). He adds excitement and tone to the book that is hard to do reading it yourself. I think it is that extra oompf!

Prepare to be thrown into an adrenaline filled read!
Loved Blake and Aaron's story. So sweet, so compelling.
But as Indies struggled to keep the people he love safe, we are trusted deeper into how far people will go for love, for those we love.
Amazing character building, world building and plot.
An all consuming series I just can't get enough of.
As always, Kenneth Obi does a stellar performance in giving us dimension and emotion in every single character.
Thank you both for yet another excellent experience!

I will definitely be listening again.

I love this book. For one new to listening to books I found this very enjoyable. I loved how the narrator Kenneth Obi used different voices for each character and it was easy to follow who was talking. Even though I have already read the book I really enjoyed listening to it and will again.

This series is sooo good!

I've read this book before listening it. I love the No Shame series! So hot and the plot is really good! Not a standalone book, you need to read previous books before this one. And the books after this.

The narrator is OK, not exceptionally good but definitely OK.

I am loving this series. It's well written with good characters and Obi does a good job with the narration.

very good story.. love the narration of course because kenneth is a narrating god lol. these characters are everything.. i love this so much and i cannot wait forbook 4!

Nice Continuation with this Series

I'm so glad I finally got back to this series, and it's a real pleasure to listen to Kenneth Obi again. He does a great job with these guys, his accents really make me smile, and it's easy to hear how much fun he's having performing Nora Phoenix's particular brand of humor, angst, and erotica.

This book continues the wild ride that is this wonderful series. All of the characters have unique personalities, which is delightful, particularly in a series where more new characters continue to be introduced. I can't wait for the next book!

Good job bringing the characters to life!! Love this series and ready to listen to the next one. Thanks

this was my first time listening to an audio book and I really enjoyed it .. Kenneth really brought the story to life with his spoken words and of course I have always enjoyed any of Nora's books!

I have read this book and the whole bundle several times. So call me surprised when I discovered new things in a book a thought to now inside and out. I was pleased to get more of the backstory behind Aaron and Blake and getting a bit more familiar with more characters. It was great to hear the developments in Indy his backstory and how 'his men' stand up for him. As always looking forward to the next audio in the series. As usual excellent narration with emphasis on the right parts and consistent use of the different voices of the characters.
I was given this audiobook for free .

Wow full of action and upset with the 3 couples. Loved listening to this series. Kenneth Obi does a wonderful job.

Love the developing relationship between Aaron and Blake. Blake helps Aaron explore who he is without fear of judgment.
Along side their story is the continuation of Indie's struggle to get away from his past. Can’t wait to listen to the next book and find out how that part ends.
Great narration by Kenneth Obi had me gripped.

This story is kind of two in one, we met Aaron and Blake in the last story, but in this story we get to meet Aaron properly and see just how much life has broken him, I just want to cuddle him and tell him he will be ok. I was not impressed with Josh, Connor and Noah’s rejection of him!!! I was happy that Indi at least stood up for him. Blake is a guy not looking for a relationship but how could he resist Aaron!!! The relationship between the two was really sweet and really loving, I loved how Blake showed Aaron it was ok to be himself and to wear what he wanted.

The other part of he story is catching up with NOah, josh, Indi and Connor, wow those guys no how to give us a story!!

This was a really enjoyable sweet story with lots of elements that Kenneth captured in this audio, his voice were on point and went from sweetness to drama fluidly so the story just flowed!!! I can’t wait for the next book on audio!!

I loved this book so much when I read it. But listening to it is totally amazing I cried a few times because of the emotion that came across from the narrator. Kenneth Obi did an amazing job bringing all 6 of the main characters to life aswell as side character. I think this is the best book I've Hurd by Kenneth so far.... definitely worth the 5* if I could reward it more I would.