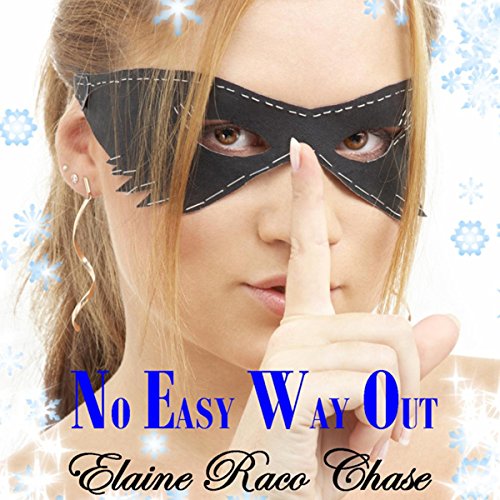 By: Elaine Raco Chase
Narrated by: Katie McAble
Try for $0.00

Engineering robots, and all non-living creatures, was easy for Virginia - not so much with people. So when her best friend dragged her to the company Halloween party, Virginia went kicking and screaming…well as much as her Playboy bunny costume allowed for any movement.

But with her mask in place and her normal reserve as tiny as her costume, Dr. Farrell suddenly let loose. Wild and wanton, she fell into the muscular arms of the costumed and masked Bandit. His virile charms and passionate kisses penetrated her reserve. But at the stroke of midnight, when the masks were to come off, Virginia fled, leaving her bunny tail in the palm of the handsome Bandit's hand.

Alex Braddock was determined to find the curvy ass that fit the tail. He was stunned when it appeared that his new boss, Dr. Farrell was his sexy rabbit.

But was it the prim, professional Virginia? She resembled oatmeal!

Or her wanton twin sister, Ginger? She got turned on by the navel in an orange!

This romantic comedy is a laugh-a-minute, with a team of fairy godmothers that would make any Cinderella blush and a surprise twist in the middle that makes for no easy way out!

What listeners say about No Easy Way Out

A Fun and Light Story

Some of our most interesting awkward moments come when we take a chance and step out of our comfort zones. Whether those moments become enjoyable or merely uncomfortable depends on your own ability to not take yourself too seriously. This is exactly what happens to Virginia, but what could go wrong with a masquerade party where she isn’t expected to appear anyway.

Dragged to the party by her best friend, Virgina appears in a retro magazine-famous bunny suit, complete with fuzzy tail. Has a marvelous time too, after a makeover brings out her inner goddess, and indulges in more than a little flirtation with the Bandit, another masked party guest. When the moment of truth arrives, and guests are to reveal their identity, Virgina darts away from the party and the Bandit, leaving behind her fuzzy tail.

For his part, Alex is less vulnerable to Virginia’s attempts at duplicity, he is attracted to the woman in the lab AND is smart enough to realize that one has to talk sometimes. There is a curious sort of chivalry and old-world manners that he displays that are less chauvinistic and more alpha-like in his position in the relationship, and his obvious approval of Virginia’s curves are blatant and brilliantly included.

Conversations run from patently absurd topics to cleverly phrased and written banter that feels true to each character, and none better epitomizes the perky, pushy and often bossy best friend Diane, who is never at a loss for advice, even when some is badly thought out. Narration in this story is provided by Katie McAble and the effects varied for me. Her voice is young and fresh, and she did capture the delivery inflection needed to distinguish characters so important in an AudioBook. I did have a few issues with the speed of her speech, adjusting the speed of the playback only seemed to diminish the qualities of her voice that I appreciated. I’d most certainly look for more titles that she is narrating, and not hesitate to listen to more.

From the clever set up to the final ending, this was an enjoyable, light story with some interesting perspective from Virginia about her struggles as a woman working in a traditionally male field, and her inability to find a balance between her professional life and the personal life and femininity that she longs to display. While this story showed just how more of Virginia’s problems may be a direct result of her attitudes and beliefs that men are incapable of falling for women with brains and ambition, not all of her fears are irrationally based. Even if she is proved wrong.

I received an audioBook copy of this title from the author for purpose of honest review. I was not compensated for this review: all conclusions are my own responsibility.

Would you listen to No Easy Way Out again? Why?

YES ...I have listened to this book quite a few times..

What other book might you compare No Easy Way Out to and why?

Any of Elaine Raco Chase's books.. they are all fantastic and irresistible

Fantastic narration.. Katie McAble does a great job with the voices.. Virginia's friend Diane in particular.

laughed out loud so many times..

What a stunningly funny book.. Again Elaine Raco Chase has excelled!! Virginia Who is brain box Phd never has any fun in fact she is a bore.. Her friend convinces her to go to a Halloween fancy dress party.. Of course she has a fantastic time.. especially the Hot sexy encounter on a balcony with a bandit until the clock strikes 12 and she runs off like just like Cinderella...she did not leave her shoe !! OH NO her fluffy cotton tail of the bunny suit!! The fun starts when she find her new co-worker is none other than the bandit! Will not give any more away.. you have to buy and listen to this fantastic book.. Suffice to say the ending was an ahhh moment !!

Another hit from Elaine Raco Chase

Another great book by Elaine Raco Chase. “No Easy Way Out” is a true Cinderella story!! Virginia is a highly intellectual woman with her Phd. She buries herself in her work and has no fun life at all! Her friends talk her into attending a masquerade ball and she meets Prince Charming who is dressed like a bandit and she is dressed like a sexy bunny! Well they have a very hot time on the balcony and when the clock strikes midnight she runs off in true Cinderella fashion! When she returns to work, you guessed it …the bandit turns out to be one of her co-workers!! What follows is loaded with fun, trickery, love and lots and lots of laughs! I highly recommend you purchase this book because you will absolutely love it!!!!

What a fun book! Serious, genius, Virginia never has any fun. Her friend convinces her to go to a masquerade party, she has a steamy time on a balcony with a bandit until the clock strikes midnight and she runs off like a fluffy-tailed Cinderella. Then the bandit turns out to be her new co-worker and she and her friend invent a twin. So funny. Things do get more serious, but I was satisfied by how things turned out.
The narration is fantastic. Katie McAble does a great job with the voices, Virginia's friend Diane in particular. Lots of fun to listen to.

Rushed and yet it still managed to drag in parts.

I honestly got real tired of constantly hearing about the best friend lighting up a cigarette, honestly she was a chain smoker and maybe that's why the narrator made her sound like a 60 year old matron aunt (I don't know why but that is exactly how I kept picturing her) rather than a 30ish professional. Alex was so wishy washy I honestly couldn't even root for the HEA, he literally sounded more misogynist and outdated than my grandfather who was 85. It was a good turn on the "Insta-love" trope, but it felt rushed and cobbled together

Couldn't even get past the first chapter

The writing is terrible, I couldn't get past the first chapter because of how bad it was. It just grated on my nerves.

What disappointed you about No Easy Way Out?

The narrator was horrible. Her accents and voices ..... ech! I didn't finish the book

What character would you cut from No Easy Way Out?

Just wasn't for me.

I loved the twin concept, but the plot fell short. Too much too fast ... no time to fall in love with the characters. So, you don't know if you want them to be in love or to walk away. I also have a hard time believing that a man who loves a strong woman would resent her so quickly. I struggled with this one, fortunately it is a short book.