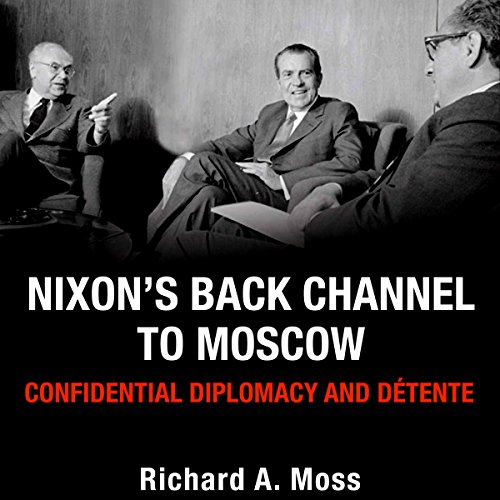 Nixon's Back Channel to Moscow

Nixon's Back Channel to Moscow

By: Richard A. Moss
Narrated by: Richard Peterson

Most Americans consider détente, the reduction of tensions between the United States and the Soviet Union, to be among the Nixon administration's most significant foreign policy successes. The diplomatic back channel that national security advisor Henry Kissinger established with Soviet ambassador Anatoly Dobrynin, became the most important method of achieving this thaw in the Cold War. Kissinger praised back channels for preventing leaks, streamlining communications, and circumventing what he perceived to be the US State Department's unresponsive and self-interested bureaucracy. Nixon and Kissinger's methods however, were widely criticized by State Department officials left out of the loop, and by an American press and public weary of executive branch prevarication and secrecy.

Richard A. Moss's penetrating study documents and analyzes US-Soviet back channels from Nixon's inauguration, through what has widely been heralded as the apex of détente, the May 1972 Moscow Summit. He traces the evolution of confidential-channel diplomacy and examines major flashpoints, including the 1970 crisis over Cienfuegos, Cuba, the Strategic Arms Limitations Talks (SALT), US dealings with China, deescalating tensions in Berlin, and the Vietnam War. Moss argues that while the back channels improved US-Soviet relations in the short term, the Nixon-Kissinger methods provided a poor foundation for lasting policy.

The audiobook is published by The University Press of Kentucky.

"Will become an instant classic. ...It is a must listen to understand the era." (Luke Nichter, author of Richard Nixon and Europe: The Reshaping of the Postwar Atlantic World)
"This narrative is often quite gripping, with wonderfully revealing quotations from the key actors." (Jeremi Suri, author of Liberty's Surest Guardian: American Nation-Building from the Founders to Obama)