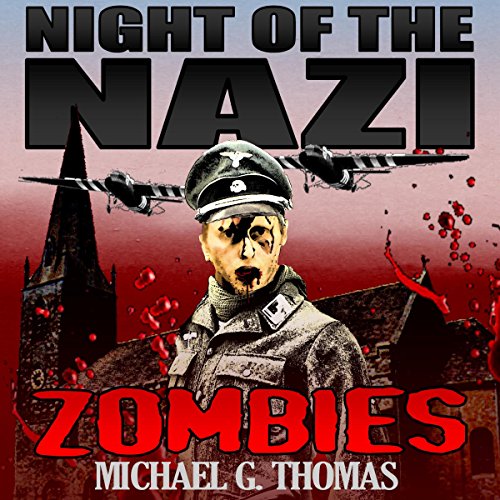 Night of the Nazi Zombies

By: Michael G. Thomas
Narrated by: Doug Miller
Try for $0.00

World War II is raging across the globe and the Nazis are being pushed back slowly by the victorious Allies. It is 1944 and the Allies are poised to open up a second front in occupied France to join the Soviet Union in a final assault that will bring the war to its conclusion. In the early hours of the D-Day invasion, Sergeant Smith and his unit of elite airborne infantry arrive in occupied France. Their mission is to capture a series of important bridges deep behind enemy lines prior to the arrival of the main infantry. It soon becomes apparent, however, that the Germans have a terrifying secret weapon, one that could drive the Allies back into the sea and could change the fate of the war!

What listeners say about Night of the Nazi Zombies

Worth a look... but look for it on a deal

The blurb for 'Night of the Nazi Zombies' reads I"n the early hours of the D-Day invasion, Sergeant Smith and his unit of elite airborne infantry arrive in occupied France. Their mission is to capture a series of important bridges deep behind enemy lines prior to the arrival of the main infantry. It soon becomes apparent, however, that the Germans have a terrifying secret weapon, one that could drive the Allies back into the sea and could change the fate of the war!"

I had not heard of the author Michael G Thomas before but as it turned out the author has certainly done a far bit of work with several other zombie titles. Doug Miller is the narrater, I could not find too much information on other titles narrated by Doug Miller.

I'll start with comments about the narration, as usual in what seems to be in the industry standard the narration is slow and can be easily listened to at 1.25 or 1.5x speed. Of course the big negative with this is not the quality of the sound, rather how it changes the dollar per hour ratio dramatically. The audio book is already on the short side with only just a tad over 6 hours long. Increasing the speed certainly lessened the listening time. So if you are cheap like me please take that into consideration.

The narration was ok considering the task set out for the narrater, he was faced with having to do several different nationalities and both genders. I could not really fault the narration. I could clearly understand him and only in one spot could I hear the tell tale paper wrestle. While it was no RC Bray type affair is certainly wasn't bad!

With my gripe of the total listening time being addressed it is time to move onto the story itself. I have listened to a lot of zombie stories but strangely this is the first I have listened to from start to end based on the concept of nazi zombies. This is strange considering on how many zombies stories actually have somewhere at some stage some nazis involved (for example the Apocalypse Z series).

The story itself is very simple and it is exactly as the blurb describes. But hardly any details are given in the how or why the nazi's go about the plan. It is a simple, chased by zombies to a building and run away type affair. The end is abrupt which leads you to believe there has to be another in the series. If there isn't then I would have to say the story is very incomplete. However, if there is another in the series to come I will be thinking carefully about purchasing it. I would feel very ripped off the same type of ending was to happen again.

Weak plot; Narration is a drone except for the foreign accents; If you are waiting for the great Nazi experiment -- guess again, it's more akin to a first person video game, but the player never gets tot he end; The weapons's explanation and detail was well done, I'll give it that.

Is there a next book it is very good