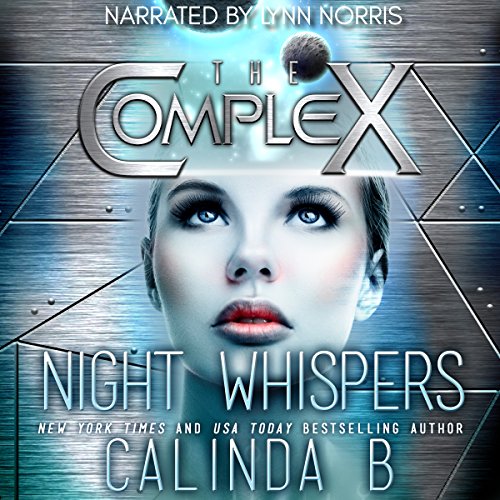 For two long terrifying years, Sakhi Borren, and her beloved brother Reve, are headed to live at The Complex. An enclosed metal and concrete manufactured world on the barren planet Lorn, the Complex is some government's version of a good idea. Its sole purpose is to "heal the rifts between warring races" - a joke if ever Sakhi heard one. If she and her brother can survive to the end, they'll leave, far richer. In the meantime, all they can look forward to is co-existing with criminals and the scumbags known as Metas. She's scared of Metas. Her brother loathes them.

Strict rules and "guidelines" govern their every waking hour. Harsh punishment awaits all who violate the rules. It's a bleak, bleary, mind-numbing existence.

A telepathic dreamer, Sakhi does her best to get along and not make waves, working alongside her charming yet terrifying boss, Thrasyllus Blüthe, a decorated war hero. She dreads each night, where she'll wade through the hopes and fears of others, caught in their dream-state. It seems she can only escape one world to be entrenched in another. But soon its evident someone is stalking her in her dreams. It could be any number of Metas she works with. It could be her boss. But she suspects it's someone far more deadly - her worst nightmare and her greatest enemy - the Meta assigned as her parole officer. He wants her eradicated - only after he seduces her.

Surviving until it's over is no longer her only option. She needs to deal with what's right in front of her face - her present. With no one to turn to, she leans on her brother for strength and comfort. But he might have a few secret plans of his own that leave her with no recourse but to rely on her own faltering strength.

What listeners say about Night Whispers

What a delighful story with lovely twist

What an interesting twist to the future and all it brings in this paranormal/Sci-Fi book. I really like the different mixture of people and how they learn to live together. There are some good times but more bad as a brother and sister try their best to make the most of the life they find their selves placed in. The author really goes into detail that really makes this story come to life with the vivid details she gives. It was very entertaining grabbing your attention from the first page until the last. The dreams are a wild trip you do not want to miss. There are some very surprising twists along with a few heartbreaking ones.

Ms. Norris does an outstanding job her character voices are given lots of emotions that you have no trouble relating to. Her male voices are just as good as her female’s ones. You know what each one is feeling as they go down the path they must. There are no repeating of words, no background noises, if any breaks where taken I could not tell. The audio is very clear and crisp that really gives you a very enjoyable listen. I thought the narrator really bought out each characters feeling, you could hear the hurt, lost, love, caring and anger in her voice as she plays out the story. Her voice is very pleasant in and out of character. It is a voice you can get lost in and you will forget you are listening to an audio. This is the first work I have listened to of hers, I am very much looking forward to listening to more of her audio’s. Bottom line the audio is well worth your time, I do plan on listening to it again. Ms. Norris performance was outstanding bring to life the audio for me.

Night Whispers is a very original, creative story with a wonderful plot you will be hook on from the first page. It is well written and well thought out covering every point. I have mixed feeling about Sakhi’s brother. He comes across as a me me me person but he is likable. I understood why he felt the way he did but I didn’t like how he treated his sister later on in the story. Sakhi I really liked a lot her heart is in all the right places. Thrasyllus can be a little confusing until you get the all over picture and then he just takes your heart away.

I loved how the paranormal was written, so many different people with so many different needs, personalities. It was interesting to see how things change and how they stay the same but are different. There were times my heart stopped a few minutes with danger all around, people fighting and killing. You are left wondering who will live and who will die. There is adventure, thrills, chills, excitement and few heartbreaking moments. I totally enjoyed this audio and can’t wait to see more of the author and narrators work.

What a great listen / read; with so much violence in society today this really hits home with those of us who just want us all to get along and have love for one another. A story of love and hope with betrayal and hardships to overcome along the way. This was such heart warming listen.

Everything you could ask for

Intensity, mystery, sexiness and romance all wrapped up in one. This book is one that I couldn’t put down and listened constantly wanting to know what was going to happen next. I hate that everything that happened to them in the manner it did, but it made their connection stronger and their beliefs change as they went along. The narrator made it even better and I look forward to more.

A wonderful story with hidden meanings

I'm not big on futuristic scifi books and movies but I can say this book was really, really entertaining. I love the hidden meanings that have a lot to do with things that are going on in our world today. Acceptance and getting along with everyone regardless of who they are or where they come from. The Narrator is perfect for this book giving the characters their voice and bringing it to life.

This book was amazing. The narrator and story line was so good and kept me intrigued. Kept me wanting more. I couldn't stop listening from start to end. I was sad when it ended.

Strict rules and "guidelines" govern their every waking hour...
Harsh punishment awaits all who violate the rules...
It's a bleak, bleary, mind-numbing existence...

Oh wow! A truly outstanding read that will blow your mind. Such a wonderful and lovely read that keeps you entertained.

For honest review. When sakhi and reve borren family is killed during the war they get caught stealing food and go to the complex on plant lorn . Where there sakhi with her telepathic dreaming finds that she is falling in love and is also being stalked by another. He brother is getting himself caught up in a uprise this is a awesome story

can't we all just get along

This is exciting. A definite keeper. Looking forward to the the next part. The narrator brings the story to life. Reasons I enjoyed this audio book:
Tear-jerker, Happily Ever After, Romantic, Wonderful characters, Page-turner, Great world building, Unpredictable, Original, Realistic, Easy-to-read, Entertaining, Action-pacaked Twisted, Steamy, Funny.
This Audiobook was given to me at my request from the publisher, author or narrator and I provided this unbiased voluntary review.

Night Whispers is a great SciFi story. It has in depth complex characters and the world building is on point. The narrator did a fabulous job at bringing the story to life. I look forward to more in this series.

Another perfect addition to the Complex Series

The Complex series is a most have for any UF or Sci-Fi reader
A suspenseful and detailed journey that will have you questioning your own reality
Norris does an excellent job of brining the characters to life , she captures the nuances and tones extremely well - you can almost taste the fear and apprehension
I really enjoyed listening to this as you tend to get a different perspective of the characters and events when you hear the story versus reading it
I can't say enough about the series itself - worth the one click
Would definitely recommend for audio listeners