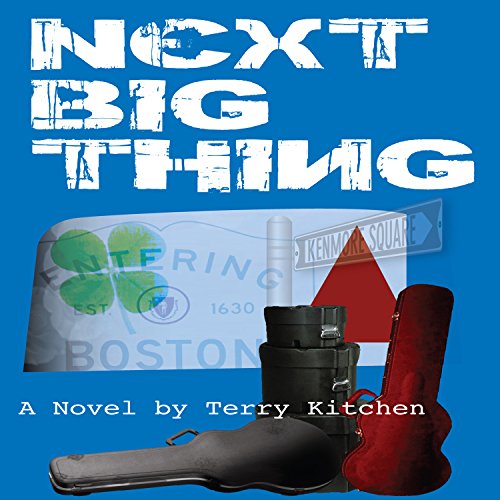 '80s Boston rock novel by scene veteran Terry Kitchen! After years in the sub-basement of Boston's teeming underground music scene, Lennon-spectacled wordsmith Mark Zodiac is used to enduring abuse, neglect, and indifference for his music. And that's just from his own band. But when he's thrust into the spotlight on the night of Shadowland's record release concert, the crowd tunes in as never before - much to the chagrin of Mark's best friend/Shadowland's star-in-waiting Will. With the record moving up the charts, their ego-librium gives way as Mark strives to keep control of his music without selling his soul in the process. Complicating Mark's world is the shadow of the loss that both drives and haunts him, even as he attempts to find love amidst the graffitied alleyways of Kenmore Square. On the eve of stardom, Mark must decide if being the Next Big Thing is really the most important thing.

At once disarmingly absurd and heartbreakingly real, Next Big Thing combines the gritty backstage vibe of Roddy Doyle's The Commitments with the emotional thawing heart of Jay McInerey's Bright Lights Big City, and every line crackles with the kinetic current of true rock'n'roll.

"A great debut novel." ( San Francisco Book Review)
"Kitchen gets all the details right - I felt myself back in the Rat, the Channel and the other clubs of that era - but most of all, he gets the underlying sense of adventure. Next Big Thing reminds me just how much it all meant and how exciting it was." (Brett Milano, author of The Sound of Our Town: A History of Boston Rock & Roll)

What listeners say about Next Big Thing