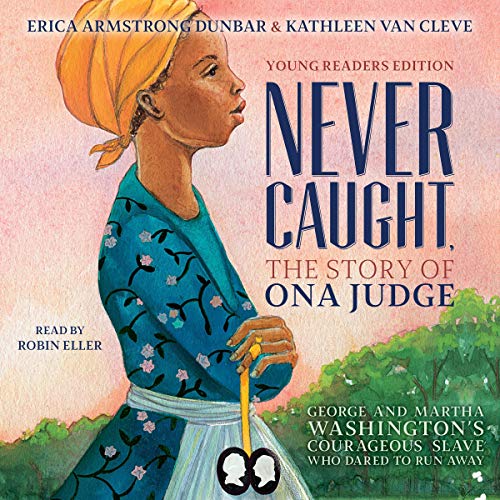 A National Book Award Finalist for Nonfiction, Never Caught is the eye-opening narrative of Ona Judge, George and Martha Washington’s runaway slave, who risked everything for a better life - now available as a young listener’s edition!

In this incredible narrative, Erica Armstrong Dunbar reveals a fascinating and heartbreaking behind-the-scenes look at the Washingtons when they were the First Family - and an in-depth look at their slave, Ona Judge, who dared to escape from one of the nation’s Founding Fathers.

Born into a life of slavery, Ona Judge eventually grew up to be George and Martha Washington’s “favored” dower slave. When she was told that she was going to be given as a wedding gift to Martha Washington’s granddaughter, Ona made the bold and brave decision to flee to the North, where she would be a fugitive.

From her childhood to her time with the Washingtons and living in the slave quarters to her escape to New Hampshire, Erica Armstrong Dunbar (along with Kathleen Van Cleve) shares an intimate glimpse into the life of a little-known but powerful figure in history and her brave journey as she fled the most powerful couple in the country.

What listeners say about Never Caught, the Story of Ona Judge

This book was a disappointment. It read like a textbook, living books are so much better for children (really everyone). I think the author could have done more with the story, while remaining accurate by putting it in a more narrative form, or going back and forth between narrative and informational texts. It just seemed like she was constantly paraphrasing every thing with “we don’t know what Ona felt... wore... thought...” My kids lost interest very soon. A book like Amos Fortune or Phyllis Wheatley: In Her Own Words pulled off being historically accurate, yet interesting far better.

I am adding this book to my middle school classroom library immediately because everyone should know the story of Ona Judge. I wish her story had been included in my American history classes growing up. The Audible version is well done.