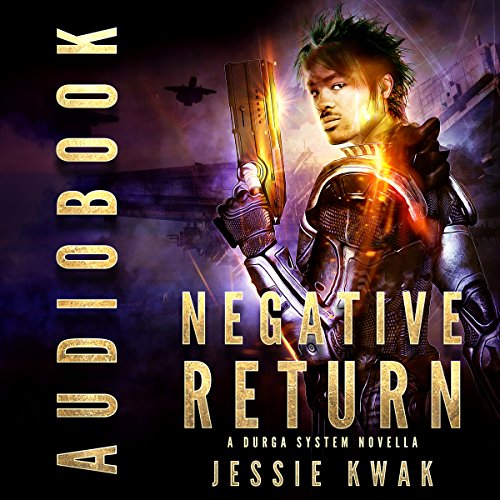 Plan A is out. Plan B is impossible. And Plan C is definitely gonna get him killed.

Manu Juric is a mediocre bounty hunter. But he's damn good at reading people and creating unexpected explosions - and that can take you a long way in this business.

Not far enough, he learns when he tries to take out one of Bulari's most notorious crime lords: Willem Jaantzen.

After the attempt is horribly botched, Jaantzen spares Manu's life in exchange for joining up with his motley crew for one small heist. There's a reason Manu avoids teamwork: it's the worst. And as the increasingly unpredictable job plunges Manu into an ever-tangling web of uneasy dangers and bristly egos, he realizes he's going to need to find some allies - fast.

And the one man he may need to trust the most is the one he's been contracted to kill.

Negative Return is the second book in Jessie Kwak's Durga System series, a fast-paced series of gangster sci-fi novellas set in a far-future world where humans may have left their home planet to populate the stars, but they haven't managed to leave behind their vices. And that's very good for business.

What listeners say about Negative Return