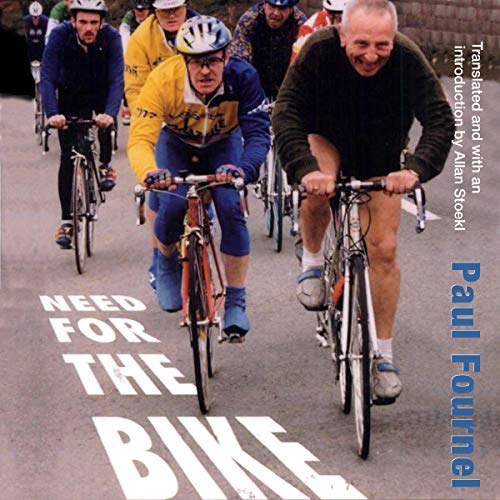 Need for the Bike

By: Paul Fournel
Narrated by: Tom Johnson
Try for $0.00

A book like no other, Paul Fournel’s Need for the Bike conducts listeners into a very personal world of communication and connection whose center is the bicycle and where all people and things pass by way of the bike. In compact and suggestive prose, Fournel conveys the experience of cycling - from the initial charm of early outings to the dramas of the devoted cyclist.

An extended meditation on cycling as a practice of life, the book recalls a country doctor who will not anesthetize the young Fournel after he impales himself on a downtube shifter, speculates about the difference between animals that would like to ride bikes (dogs, for instance) and those that would prefer to watch (cows, marmots), and reflects on the fundamental absurdity of turning over the pedals mile after excruciating mile.

At the same time, Fournel captures the sound, smell, feel, and language of the reality and history of cycling in the mountains or in the city and escaping the city, in groups, alone, suffering, exhausted, exhilarated. In his attention to the pleasures of cycling to the specific “grain” of different cycling experiences and to the inscription of these experiences in the body’s cycling memory, Fournel portrays cycling as a descriptive universe - colorful, lyrical, inclusive, exclusive, and complete.

What listeners say about Need for the Bike

A roadbike enthusiast's guide to roadbiking.

First off, this being an audiobook, it should be noted, the narration was great. I did not note any throws or misspeaks, and it was well sped to my ear. In terms of the story, frankly, there did not seem to be a connected story. I understand that this is more a series of essays, and as that it flows well enough each in itself, but there is no narrative style throughout. If you want to relive, though Paul's memories, the joy of getting that first bike, enjoying the ride, and the race, this is a book for you. If you are more into the mountain, or even more into the casual ride, groceries and home, I dare say this is less the book for you. I requested a free review copy of this audiobook, with expectation of my honest review. Thank you for allowing me to listen to and review the book!

I was given this free review copy audiobook at my request and have voluntarily left this review. As a commuter bicyclist, I found this book too technical with respect to racing. Well written and performed - just not what I was expecting. I wanted more wide ranging perspectives on biking.