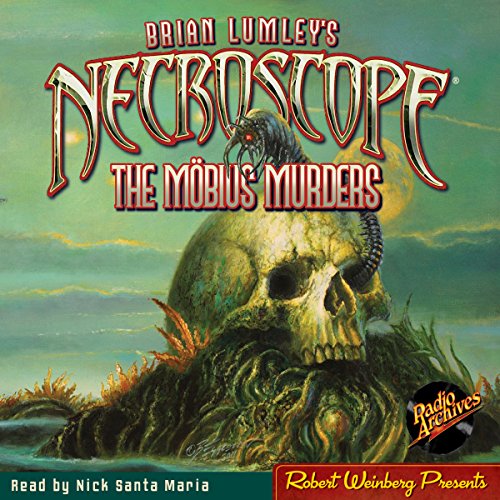 By: Brian Lumley
Narrated by: Nick Santa Maria
Try for $0.00

A Necroscope as defined by Brian Lumley, the British author of the Necroscope series, is a person with an ESP power that allows him to communicate with the dead. A Necroscope contacts the minds of corpses, which do not perish at death. Communication is two-way and peaceful. Harry Keough is the greatest Necroscope in the world.

Harry Keough always considered himself a master of the Mobius Continuum - another dimension existing parallel to all space and time. It served as his personal instantaneous gateway to anywhere in the known universe, past or present. But Harry's knowledge was not unique; two other intelligences, with powers similar to his, existed. One was the long-dead August Ferdinand Mobius himself, the German astronomer, mathematician, and discoverer of the Mobius Strip. Only after death was Mobius able to mentally explore his previously theoretical Continuum. The other was Harry's son, who not only inherited his father's mathematical skill, but also the metaphysical talent by means of which the Necroscope conversed with dead people in their graves.

Who was this stranger and how was he rocketing through the darkness of the mind-numbing dimension? More to the point, if he was not someone who entered the dimension on his own, who sent him there? Was this an attempt at murder by Mobius? Harry felt sure that neither his son nor Professor Mobius was responsible for this outrage. Then who was?

It was a question that Harry felt he had to answer, even if it meant putting his own life in danger. It's an all-new, stand-alone adventure, set in the incredible world of Harry Keough, the Necroscope.

What listeners say about Necroscope: The Mobius Murders

food for the soul

good read enjoyed it waiting to see BJ and whats up with her and harry.

For 'Necroscope' readers, not a good introduction

This is a nice re-visit to Lumley's world. I was happy to listen to it. It will not be much fun for people new to 'The Necroscope' series. Not Lumley's best work, and the narration is rushed, perhaps for Radio. The novels would be popular, I would love to hear them read.