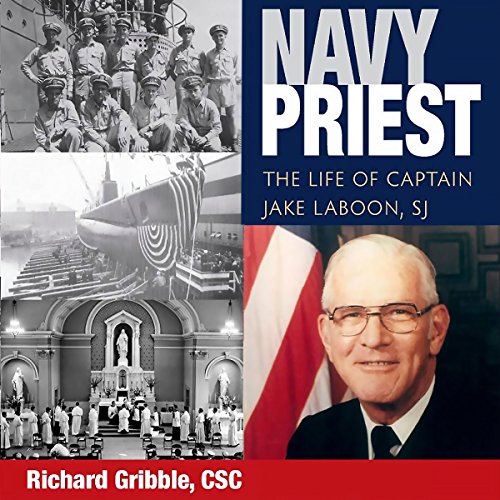 Navy Priest is a compelling biography of the Jesuit priest and navy chaplain John Francis (Jake) Laboon. Father Jake made a significant contribution to the United States Navy, both as a World War II submarine officer and, most prominently, during a 22-year career as a chaplain. Laboon served as the first chaplain for the Fleet Ballistic Missile Submarine Program but also served as chaplain at his alma mater, the United States Naval Academy; undertook a tour of duty with the US Marines in Vietnam, where he was awarded the Legion of Merit; and later served as fleet chaplain of the United States Atlantic Fleet.

Father Jake Laboon was born on April 11, 1921, in Pittsburgh, Pennsylvania. The third of nine children, he was raised in a faith-filled family. He attended Catholic schools until his matriculation to the United States Naval Academy in June 1940. A tight end for the USNA football team and an All American in lacrosse, Laboon graduated with his classmates in June 1943. He served with distinction in the Pacific submarine force, winning the Silver Star for gallantry aboard USS Peto (SS 265).

Laboon left the navy in 1946 and immediately entered formation for the Society of Jesus (Jesuits). He was ordained a priest in 1956. Two years later he reentered the navy as a chaplain, where he stayed until 1980. He then joined the pastoral staff serving at Manresa Retreat Center in Annapolis and was for four years the pastor of St. Alphonsus Rodriguez Parish in Woodstock, Maryland. He died on August 1, 1988, a victim of esophageal cancer. In 1995 the destroyer USS Laboon was commissioned in his honor.

The book is pubished by The Catholic University of America Press.

What listeners say about Navy Priest