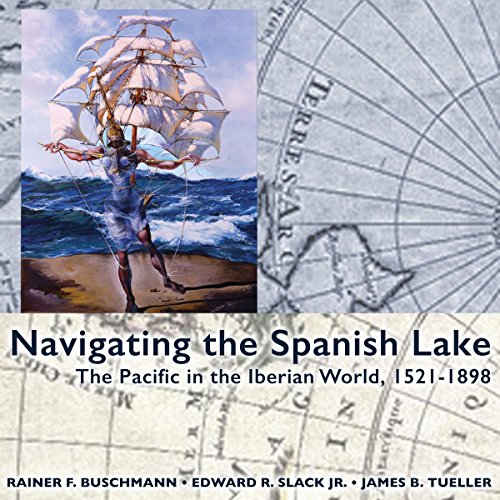 The Pacific in the Iberian World, 1521-1898 (Perspectives on the Global Past)
By: Rainer F. Buschmann, Edward R. Slack, James B. Tueller
Narrated by: Michael Piotrasch
Length: 6 hrs and 53 mins
Categories: History, European
5 out of 5 stars 5.0 (1 rating)

Navigating the Spanish Lake examines Spain's long presence in the Pacific Ocean (1521-1898) in the context of its global empire. Building on a growing body of literature on the Atlantic world and indigenous peoples in the Pacific, this pioneering book investigates the historiographical "Spanish Lake" as an artifact that unites the Pacific Rim (the Americas and Asia) and Basin (Oceania) with the Iberian Atlantic. Incorporating an impressive array of unpublished archival materials on Spain's two most important island possessions (Guam and the Philippines) and foreign policy in the South Sea, the book brings the Pacific into the prevailing Atlanticentric scholarship, challenging many standard interpretations. By examining Castile's cultural heritage in the Pacific through the lens of archipelagic Hispanization, the authors bring a new comparative methodology to an important field of research.

The book opens with a macrohistorical perspective of the conceptual and literal Spanish Lake. The chapters that follow explore both the Iberian vision of the Pacific and indigenous counternarratives; chart the history of a Chinese mestizo regiment that emerged after Britain's occupation of Manila in 1762-1764; and examine how Chamorros responded to waves of newcomers making their way to Guam from Europe, the Americas, and Asia. An epilogue analyzes the decline of Spanish influence against a backdrop of European and American imperial ambitions and reflects on the legacies of archipelagic Hispanization into the 21st century.

Specialists and students of Pacific studies, world history, the Spanish colonial era, maritime history, early modern Europe, and Asian studies will welcome Navigating the Spanish Lake as a persuasive reorientation of the Pacific in both Iberian and world history.

"The originality of this book lies in the way it recenters both history and geography from Europe to the Americas, from the Atlantic to the Pacific." (From the foreword by John R. Gillis, Professor of History Emeritus, Rutgers University)