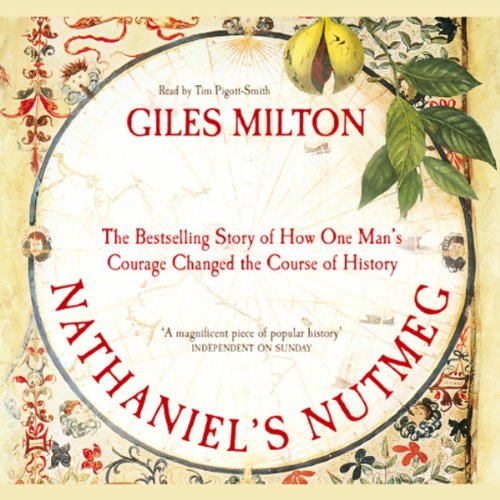 By: Giles Milton
Narrated by: Tim Pigott-Smith
Try for $0.00

In 1616, an English adventurer, Nathaniel Courthope, stepped ashore on a remote island in the East Indies on a secret mission: to persuade the islanders of Run to grant a monopoly to England over their nutmeg, a fabulously valuable spice in Europe. This infuriated the Dutch, who were determined to control the world's nutmeg supply. For five years, Courthope and his band of 30 men were besieged by a force 100 times greater, and his heroism set in motion the events that led to the founding of the greatest city on earth.

A beautifully told adventure story and a fascinating depiction of exploration in the 17th century, Nathaniel's Nutmeg sheds a remarkable light on history.

"A magnificent piece of popular history." (Independent on Sunday)

What listeners say about Nathaniel's Nutmeg

The birth of a great company

This is a interesting short history book that leads to the formation of the East India Company. An interesting tale and a good introduction to John Company

A Brilliant and Unknown Story in History that shaped today's world as we know it.

A Brilliant and Unknown Story in History that shaped today's world as we know it.
Most likely from limited documentation this story is pieced together for our complete benefit to know the hardships ,brutality and quest for the future that has gone before.
This book should also be a school read .
Thoroughly enjoyable 😀

too much detail missed from original, very disappointed. why bother with an abridged version? needs more thought

How has Giles Milton been coerced into releasing this mangled summary of one of his most well-regarded narrative popular histories? Should be much longer and more detailed as the book was.

Great book - Audio version misses some of the best bits

I read the paperback version of this a few years ago. It was captivating and a real insight. I couldn’t put the book down. The Audible version is very good but misses many of the real highlights such as The Dutch torture techniques, the trade with native Americans on Manhattan and the seedy goings on in various ports. That aside still enjoyable but buy the paperback

Having just read the magisterial Silk Roads I was expecting a lighter but informative tale of an interesting bit of economic and regional history, perhaps like 'Longitude'. The spice race is a good topic but despite a lively narrator the text is pedestrian and unimaginative.
Effectively a list of voyages and cargoes, despite using much source material the author was unable to either entertain or inform. Many opportunities to examine the economic history were missed.
Dutch colonial history no doubt deserves criticism but the jingoistic tone of plucky Brits and evil Hollanders is so partial that I couldn't take it seriously. Meanwhile the 'natives' are casually sidelined as colourful background: no attempt to examine - casual racism.
Very disappointed

Taking my 14yo to Banda to toast the Captain at the spot he was murdered by the filthy Dutch.