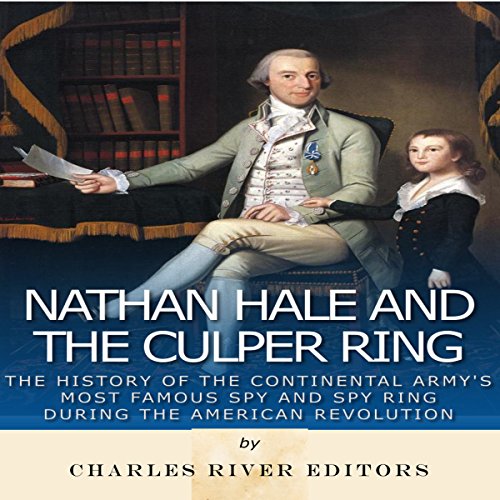 Nathan Hale and the Culper Ring

For over 230 years, American schoolchildren have been taught about the story of Nathan Hale, or at least a legend of it, and in the process the myth of Hale and his apocryphal final words have immortalized the young man as America’s most famous spy, despite his failed mission. After the siege of Boston forced the British to evacuate that city in March, 1776, Continental Army commander George Washington suspected that the British would move by sea to New York City, the next logical target in an attempt to end a colonial insurrection. He thus rushed his army south to defend the city.

In the summer of 1776, the British conducted the largest amphibious expedition in North America’s history at the time, landing over 20,000 troops on Long Island. Washington’s army would ultimately be pushed west all the way through New Jersey the rest of the year, but he nonetheless maintained intelligence operations around New York City, and one of the early spies was young Nathan Hale.

A young officer in the Continental Army from Connecticut, Hale was asked by Washington to go behind British lines on Long Island and bring back information on what the British were up to there. Unfortunately, Hale was quickly identified by Loyalists, found with incriminating papers on his body, and executed. Hale’s name may have very well been lost to history but for propaganda efforts to make him a martyr to the cause, most notably the reports of his last words about regretting that he had but one life to lose for his country. If Hale said anything like the quote he’s best known for, he was likely reciting an exchange in the play Cato by Joseph Addison or playing off of it, but regardless of what he actually said, the story and the legend of Hale aimed to cover up the fact that his mission was an abject failure, due both to bad luck and ineptitude.

Nathan Hale and the Culper Ring: The History of the Continental Army’s Most Famous Spy and Spy Ring during the American Revolution profiles the life of the young spy and the spy ring Washington organized after his execution.

What listeners say about Nathan Hale and the Culper Ring

Interesting History, but not the best telling

It seemed a little odd to have a book about an American Revolutionary hero read by a person with a British Accent. The writing itself was pretty factual, often just quoting writers of the time, but it was somewhat try in delivery and no where near as captivating as the topic should have been.

Good history about a great group of people! A little dry at the beginning. Narrator is very good.