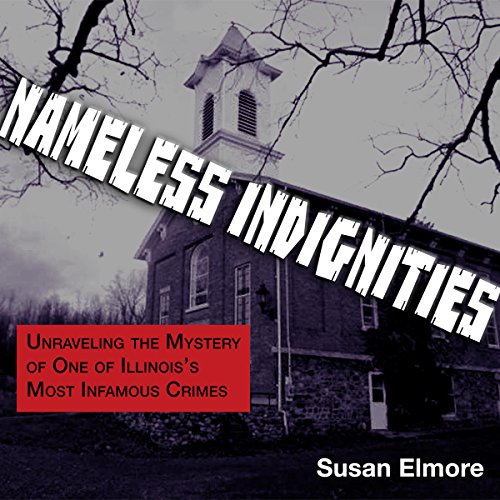 By: Susan Elmore
Narrated by: Nancy Isaacs
Try for $0.00

Nameless Indignities is an intriguing account of a historical true crime with more twists and turns than a roller coaster ride. If you are fascinated by history relating to crime, law, medicine, psychology, hysteria, rape, journalism, or genealogy, then this Victorian mystery is for you. The story will hold you in its grip from beginning to end with multiple suspects, a lynch mob, perjury and bribery, a failed kidnapping attempt, broken family ties, cover-ups, financial devastation, and at least two suicides.

When young schoolteacher Emma Bond was brutally gang-raped and left for dead in her country schoolhouse near Taylorville, Illinois in June 1882, an enduring mystery was born. Although she survived, her recovery was hindered by hysteria, amnesia, and some unusual physical complications. The story was covered by newspapers across the land, but some of the wounds inflicted upon the victim were so appalling that the press refused to print the ugliest details, referring to them only as "nameless indignities". Eighteen months went by before three of the six suspects were brought to trial.

After the verdict, however, the public's unwavering support for the victim began to fade amid persistent theories and rumors that she had lied and that no crime had been committed. At the time, educators, editors, politicians, lawyers, and doctors eagerly weighed in on the case and its ramifications. But with Victorian doctors unable to agree on anything of a physical or a psychological nature, Emma's life went into a tailspin from which she never recovered. The crime also took a heavy toll on local residents, pitting families and neighbors against one another. The fact that the case was never fully resolved gave it a certain staying power, with many unanswered questions.

What listeners say about Nameless Indignities

What did you love best about Nameless Indignities?

The fact that the story is so old.

Would you be willing to try another one of Nancy Isaacs’s performances?

Assuming that the author used correct punctuation to indicate pauses, etc., the reader didn't use them. And pronouncing "school" much more like "skull" gets very distracting since the word is used so often in this great story. She just was very hard to listen to - I stuck with it because of the story.

I don't want to give any spoilers. The book begins with the climax and goes downhill from there. The narration is almost timeless, but if fairness she doesn't have much to work with.