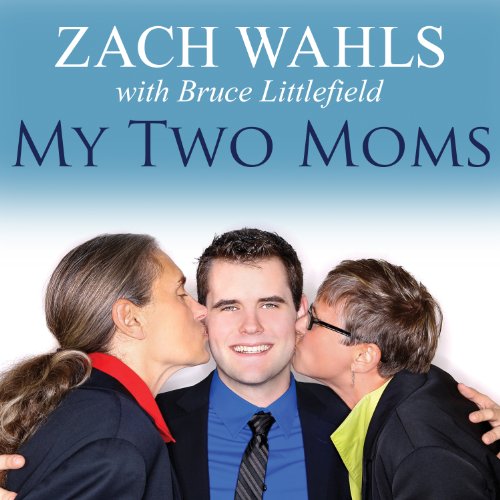 On January 31, 2011, Zach Wahls addressed the Iowa House Judiciary Committee in a public forum regarding civil unions. The 19-year-old son of a same-sex couple, Wahls proudly proclaimed, "The sexual orientation of my parents has had zero effect on the content of my character." Hours later, his speech was posted on YouTube, where it went viral, quickly receiving more than two million views. By the end of the week, everyone knew his name and wanted to hear more from the boy with two moms.

Same-sex marriage will be a major - possibly the defining - issue in next year's election cycle, and Wahls speaks to that, but also to a broader issue. Sure, he's handsome and athletic, an environmental engineering student, and an Eagle Scout. Yet, growing up with two moms, he knows what it's like to feel different and to fear being made fun of or worse.

In the inspirational spirit of It Gets Better, edited by Dan Savage and Terry Miller, My Two Moms also delivers a reassuring message to same-sex couples, their kids, and anyone who's ever felt like an outsider: "You are not alone."

"Here he expands on his life story, speaking to all those who feel like outsiders. A needed book, and Wahls is a known quantity." ( Library Journal)

You will not regret listening to this.

Where does My Two Moms rank among all the audiobooks you???ve listened to so far?

The performance is quite good but the content is so wonderful who notices all that much. This ranks with some of the very best I have heard in my decade at Audible.

Which character ??? as performed by Kris Koscheski ??? was your favorite?

What???s the most interesting tidbit you???ve picked up from this book?

Values enrich everyone around you. And that confirms what I knew but really drives it home.

Really listen to the sample at least this is wonderful material.

At the bottom, we're all the same person

What made the experience of listening to My Two Moms the most enjoyable?

Zach's story is so personal yet so common to every family. The love in which he grew up permeates the book and tells us that the love of family knows no boundaries. The reader has a young man's voice which lent the aura of growing up in his shoes.

What does Kris Koscheski bring to the story that you wouldn???t experience if you just read the book?

Reading print creates a voice in one's head. A good reader adds an immediacy to the story, a dimension not available by just reading the book. I've also found that a reader's emotions are as engaged as mine are in a story.

Families are families regardless of their makeup.

Zach has an important message to convey. My fear is that only those already convinced of the viability of a two-mom or two-dad family will read this book, but it's a book that really needs to be read or heard by those not so convinced. Love endures in a much wider world than those people allow.

Where does My Two Moms rank among all the audiobooks you???ve listened to so far?

This story thrilled me from the day I first saw Zach's speech on YouTube. He is a sharp (SHARP) young man with quite a future ahead! His wonderfully normal and heart-warming family story may do a lot to convince the most skeptical-- let's hope.

What An Amazing Gift!

One day, I think historians are going to look back on this as one of the first true voices of a new generation: one that values love and family over doctrine and hatred. His voice will be one that leads a no-longer silent number of children of same-gender couples out of their fear to tell the world that they were loved and had a happy, normal childhood.

If you have ever questioned whether or not same-gender couples are capable of instilling the necessary skills and providing the love needed for a growing child to thrive and excel, you have to look no further than this book.

It is my hope it will be read by all those who want a greater understanding and also that it change the hearts and minds of those who have no understanding to begin with. I hope it allows the children of same-gender couples to realize that they are not alone. I also hope it brings comfort to parents of lesbians and gay men to know that even though they are not able to have a traditional family, a family can be theirs! And that family can be filled with all the love, acceptance, hope, dreams and values of any other family in America.