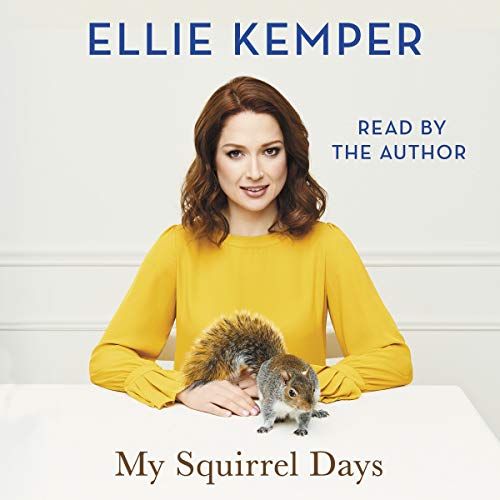 There comes a time in every actress' life when she is faced with the prospect of writing a book. Ellie Kemper, the star of hit Netflix sitcom Unbreakable Kimmy Schmidt, first gained attention with a one-woman show, Feeling Sad/Mad, at the UCB Theatre in New York, founded by a comedy troupe that counted Amy Poehler, among others, in its ranks. Kemper's popularity exponentially grew with a regular role in the US version of The Office, followed by appearances in the highly successful Bridesmaids and 21 Jump Street.

Kemper's infectious personality and easy, natural humour inspired Tina Fey to develop and write Unbreakable Kimmy Schmidt specifically for her, and those same qualities shine through in My Squirrel Days, essays and funny stories from Kemper's childhood and career. From her upbringing in suburban St. Louis to her stuffed walrus Waldo to auditioning for Saturday Night Live, from the time she accidentally insulted Ricky Gervais at the Emmy Awards to when she offered a maxi pad to Steve Carrell, Ellie will guide you along her journey through adulthood, from unorganised bride to impatient wife to anxious mother who - as recently observed by a sassy hairstylist - 'dresses like a mum'.

Having previously written for GQ, Esquire and The Onion, Ellie Kemper has a voice that is the perfect antidote to the chaos of modern life. My Squirrel Days promises to be as hilarious and as joyous as the best of her work onscreen.

What listeners say about My Squirrel Days

As a dedicated Kimmy fan I had to read this book but of course it's better than the written book since it has Ellie's superb delivery. I really enjoyed it and will definitely listen again which is something I rarely do.

I'm a fan of Ellie's from Kimmy Schmidt. But this just wasn't entertaining. I listened to the audiobook, maybe it's better in paperback.

The worst audiobook I have ever listened too

If I could give zero stars I would becoz this was truly a terrible book. The author was boring. Her story’s were rubbish. Don’t waste your time. I wish I haven’t. I love Amy Poehler and when I saw they had worked together I thought surely this gal has an edge! NOPE!!!!

This was funny and charming, Ellie's reading of the book made it really enjoyable. I'd recommend this book in a heartbeat :)

Ellie Kemper is simply wonderful and this book is testament to that. It has great stories and a really enjoyable insight to a young aspiring actors life.