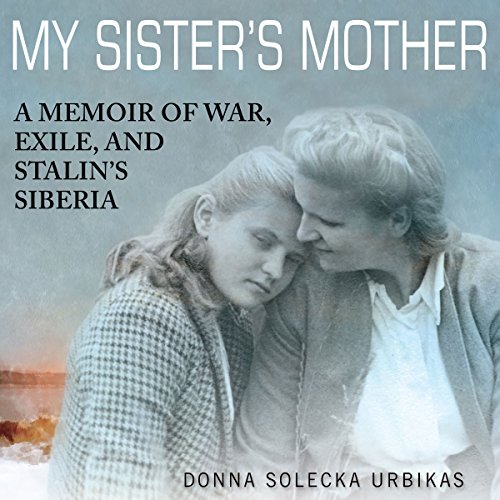 By: Donna Solecka Urbikas
Narrated by: Devika K.
Try for $0.00

Donna Solecka Urbikas grew up in the Midwest during the golden years of the American century. But her Polish-born mother and half sister had endured dehumanizing conditions during World War II, as slave laborers in Siberia. War and exile created a profound bond between mother and older daughter, one that Donna would struggle to find with either of them.

1940, Janina Slarzynska and her five-year-old daughter Mira were taken by Soviet secret police (NKVD) from their small family farm in eastern Poland and sent to Siberia with hundreds of thousands of others. So began their odyssey of hunger, disease, cunning survival, desperate escape across a continent, and new love amidst terrible circumstances.

But in the 1950s, baby boomer Donna yearns for a “normal” American family while Janina and Mira are haunted by the past. In this unforgettable memoir, Donna recounts her family history and her own survivor’s story, finally understanding the damaged mother who had saved her sister.

The book is published by the University of Wisconsin Press.

“Superbly records the bitter suffering both of victims of the Soviet Gulag and of displaced emigrants.” (Marek Jan Chodakiewicz, author of Between Nazis and Soviets)

“A primer for all who seek to understand the harrowing journey of Poles during this fateful period.” (Allen Paul, author of Katyn: Stalin's Massacre and the Triumph of Truth)

What listeners say about My Sister's Mother

Superb Title and What an Odyssey!

Donna Solecka Urbikas has masterfully captured the incessant stories of the exile and journeys during WWII and following years shared by her mother who seemed obsessed with making it known what had happened to her and her daughter Mira. The story blends the stories, later recorded memories of her mother and sister, bits of history of eastern Poland that Russia invaded in late 1939, the exile to work camps, life in refugee camps in so many countries, and rescue by a young Polish officer with a separation and reconnecting. The story and the distances covered by Janina and Mira offers insight to what happened to some of the Polish Catholics. The youngest daughter had the advantages of growing up and learning in American schools and witnessing the strong bond between the much older sister and mother with links to another world and time that the stories were insufficient to complete emotional bonds.

With education, travel, employment, marriage and becoming a mother, the author encounters family illnesses and various issues that have lead to a better understanding and an emotional journey to write this excellent book that has been in the works for nearly 30 years.

While I normally have had problems with books or movies that skip back and forth in time, the author has struck a really good balance with this style that seems to help with the character development and weaving herself into the story for the full impact of what WWII did to the lives of the people living then and the ones to follow.

The narrator is phenomenal for this book. I hope people will visit the author's web site for more information. Also, I hope that some people might share at least some portions of this book with students.

Good memoir with a different structure from other memoirs - mother's and daughter's points of view. Not the strongest survivors in war memoirs, but very lucky for the decisions they had made.

The narrator's voice is usually good, but when she tries to imitate male screaming sounds, it gets pretty annoying. Her voice gets very depressing at times, as if she's falling asleep.

Towards the 2/3 point, things got pretty bleak. There were multiple very depressing stories, with no positive memories to balance out. Coupled with the narrator's depressing voice, I had to stop listening for a while and didn't want to pick it back up the next day.