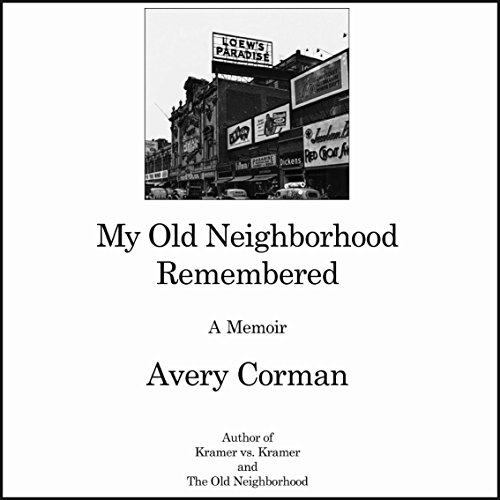 My Old Neighborhood Remembered is a lyrical remembrance of neighborhood life that has vanished from the culture. Best-selling author Avery Corman vividly recreates the vibrant, colorful neighborhood where he grew up - in the Bronx of the 1940s and 1950s. He recalls candy stores and bookmakers, egg creams and double feature movies, street games like stickball and Johnny- on-the-pony, school days of a different era, social mores that have disappeared. His was the generation of children of the home front during World War II, and he recounts how the war was embedded in daily life, and how children became literate through newspaper coverage of the war, and through Dick and Jane and comic books. He remembers in his neighborhood a deep sense of community and shared experience.

My Old Neighborhood Remembered is a memoir that is urban history. Avery Corman also discusses the factors that altered the Bronx, in a decline that was particularly rapid and vast, before the area began to rebuild. As the author of Kramer vs. Kramer, a common assumption has been that Avery Corman was himself divorced; he was not. He was, however, a child of divorce at a time and place when divorce was rare, an experience woven through the narrative. My Old Neighborhood Remembered is told with the storytelling skills that have made Avery Corman a critically acclaimed author whose books have been published throughout the world.