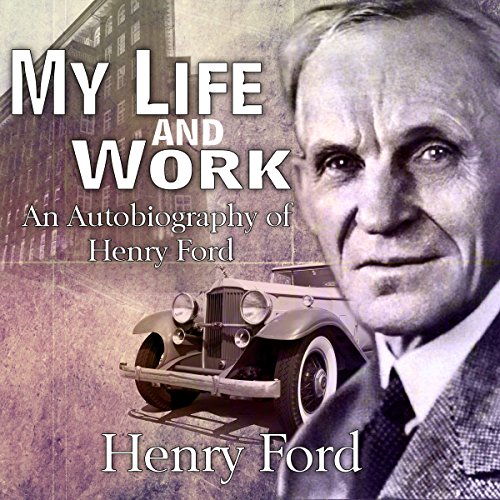 My Life and Work: An Autobiography of Henry Ford

My Life and Work, the autobiography of Henry Ford (written with Samuel Crowther), gives readers an inside view to the mind and life of a true American dream. Born in 1863, Ford rose from humble beginnings in Michigan to become one of the most well-respected and revered businessmen of the industrial revolution. A true innovator, Ford changed American industry forever with his advances in transportation and technology. His production of the Model T and his process of mass manufacturing forever changed the American marketplace. Through his founding of Ford Motor Company, Ford became one of the richest and most well-respected businessmen in world history.

What listeners say about My Life and Work: An Autobiography of Henry Ford

This is one of the best audiobooks I have ever listened to!

Henry Ford was obviously a genius with immense talent. Sure, we all know that he invented the automobile and the assembly line-both remarkable achievements in their own right. But what is less well-known about Ford is the breadth of his genius, and the fact that he was, for the most part, a man of great principle.

I say "for the most part" because Ford espoused beliefs toward Jews that were disappointing at best, and at worst, dangerous. While Ford's opinions on manufacturing were fairly detailed and specific, his criticisms of Jews were general and vague. In my experience, a lack of specificity is often a tell-tale sign of an irrational-and ultimately prejudiced position.

With great passion, Ford argued that the function of all decent business is to provide service to mankind. As such, Ford's business model supported the concept of "continuous improvement" long before it was adopted by Japanese car makers like Toyota (continuous improvement=better cars=better service). Providing service also meant selling cars at the lowest possible price, paying employees the best possible rate, abolishing excessive bureaucracy and hierarchy, and taking steps to extend the life of his cars-because all of these things led to greater service.

Remarkably, Ford successfully applied these same manufacturing concepts to the manufacturing of tractors, Navy boats, railroads, hospitals and even a school!

Clearly, Ford was able to back up his manufacturing philosophy with great results, proving his expertise in the area of manufacturing. Ford's manufacturing success gave him credibility and influence on a world stage, which unfortunately added weight to his anti-Semitic arguments. God only knows to what extent these arguments helped fuel the Holocaust.

Aside from the unfortunate blemish on Ford's character, this was an interesting and informative audiobook, with many important ideas to consider in the areas of business and manufacturing.

I have listened to other audiobooks that were narrated by Carson Beck, and he never disappoints! He has a nice voice and he is easy to listen to.

it's great to see a little bit of what Ford was going through back in the day and growing up just trying to survive it's pretty awesome to see an inside look into his life. worth your time and patience

The Story of a Very Accomplished Man

I wasn't sure what to expect when I first starting reading this, but I became quite fascinated with hearing Henry Ford speak in his own words. The narrator did a good job in this regard and I gained quite a bit of insight into what made Henry Ford tick. Ford had a wide range of opinions and philosophies on a variety of topics ... he was clearly a very deep thinker. Overall, I enjoyed the book and felt like I spent a few days talking with Henry Ford -- a one sided conversation as it was. Well recommended!

This is one of the best books I’ve ever read!
Any entrepreneur or business person should absolutely read this book! Fascinating, conceptual, all around excellent excellent book! Thank you Henry Ford!

A very insightful look into a genius who was well ahead of his time. I only wish it were an actual biography rather than a collection of thoughts.

Lots of interesting parts, given its Henry Ford, it makes a good listen, there are parts where figures and costing are quoted, I always zone out in these sections, as it pretty difficult to take in when listening, but generally a worth while book, I will be revisiting soon.

straight to the point and simple. Ford

Ford shares briefly about his story and then shares In several chapters his philosophy about business, money, history and future. great thinker. the one missed chord is the part he hints about the Jews in America. all in all a great hear.

Great words for all entrepreneurs

the world at his time had a very positive attitude towards serving solving general human problems but we have digressed from those ideals. the world is run by bankers who produce zero real value and that has shaken the foundation of our economy and causing us to misinform and miseducate the future generation too. we need to read his works again and again. RIP Mr Ford

Just an exceptional book on how real Business should be done. loved every minute of it