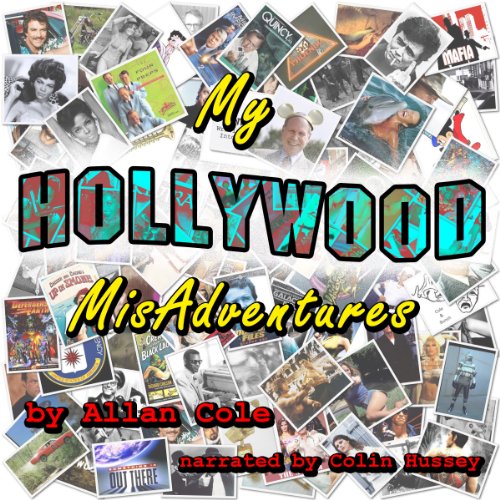 By: Allan Cole
Narrated by: Colin Hussey
Try for $0.00

Tales, sometimes tall but always true, of Allan Cole's years in Hollywood with his late partner, Chris Bunch. How a naked lady almost became our first agent. How we survived La-La Land with only the loss of half our brain cells. How Bunch & Cole became the ultimate Fix-It Boys. How an alleged mafia don was very, very good to us. The guy who cornered the market on movie rocks. Andy Warhol's "Fire Extinguisher". The Real Stars Of Hollywood. Why they don't make million-dollar movies. See The Seven Pi$$ing Dwarfs. Learn: how to kill a "difficult" actor...and many more stories.

What listeners say about My Hollywood MisAdventures

Vocational Guidance With a Pithy Twist

Would you consider the audio edition of My Hollywood MisAdventures to be better than the print version?

The audiobook has the added dimension of a reader who really, actually, and definitely "gets it" with respect to the angle from which the screenwriter (Allan Cole) viewed the business of film and TV writing in the decades covered by this autobiography.

I have heard Allan Cole's voice -- this reader does not sound like him, but he has absorbed and replicated the intonation and wry humor.

I have also read the text version of the MISADVENTURES, and even so can't stop listening to this marvelous rendition!

This is non-fiction -- but it flows like fiction from one climax to another, a story that races on and on leaving you gasping and chuckling even as it draws, in broad technicolor, a very true picture of the nature of The Biz.

You can listen and identify with the writers until you can judge whether you, yourself, really want to live such a life. Before I decided to dive into writing professionally as a novelist, I considered screenwriting very seriously. So I read a lot of biographies, learned (in much diluted form) what is set forth in this biography, and chose text novel-writing instead. This autobiography explains my choice. I highly recommend it to anyone considering any writing career moves.

MISADVENTURES is about Hollywood decades ago - but from all I know about the current situation, it hasn't changed much except in technology. The place of "the writer" in the process of bringing you visual entertainment is still pretty much the same -- just as actors, writers are Talent On The Hoof. Get this book to find out just what that means.

Which character – as performed by Colin Hussey – was your favorite?

Colin Hussey captures the essence of "the past" in Hollywood, the society and the culture that originates our visual entertainment. But the value of his interpretation lies in how it leads you (the potential screenwriter of the 2020's) to understand the dynamics that are creating the current ferment of Indie productions, Amazon and Netflix grabbing a piece of that action, and perhaps most oddly, he also captures the essence of the Videogame world.

How is that? Allan Cole worked on The Hulk, Werewolf, and other science fiction/fantasy TV series while at the same time writing a magnificent series of science fiction novels (STEN SERIES -- check audible for that!)

The success of these edgy, not-set-in-our-reality, TV Series introduced a generation to the possibilities which were concurrently unfolding via the technology of computers and the arcade videogame graphics. The fast action and unlimited imagination of the comic-graphic-novel brought to life on TV & film melded into the videogame and launched an industry. There's another new industry brewing. Do you want to lead that new industry?

Listen carefully to this book and you will hear and understand the future of the entire entertainment industry. Hussey brings that misty future to life with his sensitive understanding of the nature of this biographical material.

The more things change; the more they stay the same.

Note the number of hours of the entire work - which downloaded for me in two parts. The chapters are short, but the entire work is very long. It will likely fill your driving commute for weeks and you will truly look forward to those usually horrid commuting hours.

See my reviews of the STEN SERIES on Amazon. This autobiography and the Allan Cole autobiography titled LUCKY IN CYPRESS give you vast insights into the content and origin of these text-novels. The whole set is now or soon will be on audible.com.

If you want to launch a writing career, this body of material will show rather than tell you where writing success comes from and what it takes to bring it from that origin all the way to the end-user's hands. You will be able to feel whether you have what it takes.

Even if you are not headed for a writing career, this body of work explains a lot about what's going on in the world today -- which may give you a handle on what you can do about it. The best part, though, is how it can brighten your day!

Gold for anyone wanting to be entertained

What made the experience of listening to My Hollywood MisAdventures the most enjoyable?


Story is timeless. It's the real working Hollywood. This is what happens, and it's delightfully told by Allen.

Entertained me while stuck in LA traffic.

Have you listened to any of Colin Hussey’s other performances before? How does this one compare?