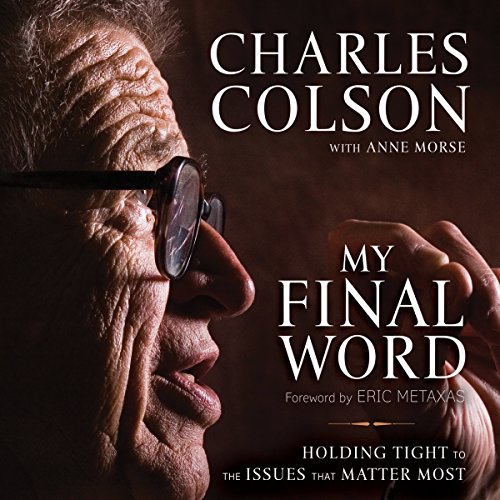 One of the most respected and influential Christian leaders of the last several decades, Chuck Colson engaged millions through his books, public speaking, and radio broadcasts. In My Final Word, longtime Colson coauthor Anne Morse has selected and arranged pieces Colson wrote mostly during the last decade of his life, spotlighting what he saw as key topics of ongoing importance for Christian cultural engagement. Some of these issues include:

Both longtime and new readers and listeners will be struck by the power and immediacy of Colson's arguments. My Final Word is a fitting end to Colson's distinguished publishing career, a behind-the-scenes encounter with an influential thinker and a needed call to an ongoing and relevant Christian public witness.

What listeners say about My Final Word

Wonderful insights! At least a dozen insights to remember. We are grateful for the transformed life of Chuck Colson.

This book is a collection of writings not previously published by Chuck Colson. Though clearly from a Christian and conservative perspective, Colson writes thought provoking essays and offers keen insight into society and culture today. Narration is excellent and will keep you listening throughout.