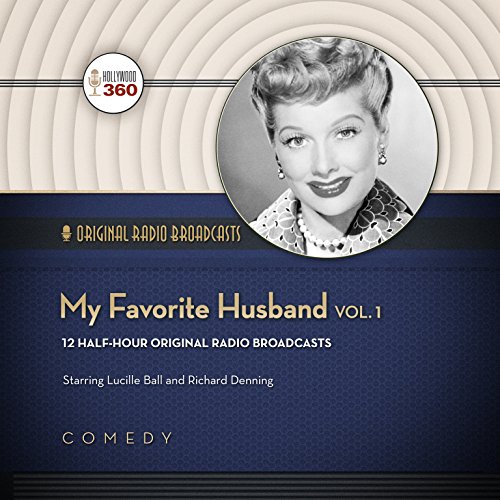 My Favorite Husband hit the CBS Radio airwaves in 1948, starring Lucille Ball and Richard Denning as Liz and George Cugat - who later became Liz and George Cooper when confusion with bandleader Xavier Cugat prompted a name change. Set in the fictitious town of Sheridan Falls, the show follows the happily married couple, residents of 321 Bundy Drive, through mischief and various predicaments, from faked illnesses to trouble with exes. George, a banker, and Liz, a housewife, were billed as "two people who live together and like it." The beloved series eventually transitioned to television in 1953, recast with Joan Caulfield and Barry Nelson, as Lucille Ball was busy filming the megahit I Love Lucy with her real-life husband Desi Arnaz.

What listeners say about My Favorite Husband, Vol. 1

I am a fan of I love Lucy reruns, so I was thrilled to learn of the show that started it all, and that there were episodes available to the public. I enjoyed this, also, because it's entertainment without thecursing, sex, violence, etc., which is refreshing. I would love for the rest of episodes to be made available, as well!

Only One Lucy (NEED MORE VOLUMES!)

Before “I Love Lucy” was on TV, there was “My Favorite Husband “ on the radio. There’s only one Lucy! I love this old time radio show! I wish they would offer more! You can’t listen to these episodes without laughing or smiling sometimes. You can picture Lucy, up to her old antics again. If you like classic radio, you’ll enjoy this!
HOW ABOUT COMING OUT WITH MORE VOLUMES OF THIS SHOW?? VOL 2 & VOL 3?

More Context Would be Helpful

As this series did recycle scripts, it would be helpful for the producers to provide the air dates and all of the titles included in such a compilation.

A 12 episode radio comedy which preceded her television show. interesting to note the first couple of. shows had the couple named Cogat then changed. The scripts were written by future I love Lucy writing team. delightful way to enjoy a commute or bedtime while winding down.

Highly recommend for a good laugh

I had an audio cd from a Lucille ball book. I got it for Christmas in the 90s. I loved listening to it it had two episodes of my favorite husband on it. I would listen to a lot as a kid. Now as an adult I found this on audible I was in awe and so excited. I laughed so hard at all of these if you love Lucy you will love this radio show!

I listened while working and it made my day so much nicer! I'm going to look for more.

love old time radio! lucille ball is funny from radio to tv. recommended for all ages.

In these crazy times what a pleasure to enjoy some honest humor. Forget the stereo types and remember the age of when this was done. Enjoy the humor and crazy fun delivered by all this fine talent!

Good clear recording.
Performance by a good cast you can see how Lucille Ball adapted the format for TV.
Entertaining.