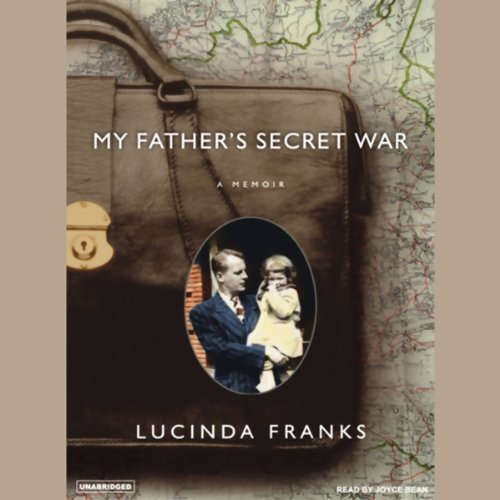 In this moving and compelling memoir about parent and child, father and daughter, Pulitzer Prize-winning writer Lucinda Franks discovers that the remote, nearly impassive man she grew up with had in fact been a daring spy behind enemy lines in World War II. Sworn to secrecy, he began revealing details of his wartime activities only in the last years of his life, as he became afflicted with Alzheimer's. His exploits revealed a man of remarkable bravado: posing as a Nazi guard, slipping behind enemy lines to blow up ammunition dumps, and being flown to one of the first concentration camps liberated by the Allies to report on the atrocities found there.

My Father's Secret War is an intimate account of Franks coming to know her own father after years of estrangement. Looking back at letters he had written her mother in the early days of WWII, Franks glimpses a loving man full of warmth. But after the grimmest assignments of the war, his tone shifts, settling into an all-too-familiar distance. Franks learns about him, beyond the alcoholism and adultery, and comes to know the man he once was.

Her story is haunting, and beautifully told, even as the tragedy becomes clear: Franks finally comes to know her father, but only as he is slipping further into his illness. My Father's Secret War is a triumph of love over secrets, and a tribute to the power of family.

This book was a disappointment and overwhelmingly sad. The author's research felt questionable, almost wishful thinking and generally suspect. Very little of these partially remembered, pieced together and retold uncomfortable stories sounded on the mark or remotely believable. The author is an experienced journalist but I'm afraid that when talking about elderly parents people often lose perspective. I can't recommend this book.

I made the mistake of thinking this was a story about the war. Instead I got a "Daddy Dearest" account which is full of conjecture and little fact. If you are looking for information or fact, pass this by.

... but 2 stars for the narration, which pretty much kills the story.
The story line was compelling to me, from the interest point of a daughter who comes to find out that her father's military career was as quietly intense as hers was celebrated.
At least, that's what I got out of part 1. Sorry to say, that I couldn't bear to listen to the narration any further than that. I found the narrator's attempts at characterization too distracting to continue listening further.
I will most likely buy the hard copy of the book, to continue the story.

A wonderful tale of finding a parent and yourself

I wasn't sure what to really expect from this book but what I found wasn't it. This is not a history of a military hero, though it does have some interesting military history. This is the story of how a man deals with his life after the shooting stops. How is marrage and family are affected and how is respect to his word nearly destroys all. We travel with the writer as she tries to find out her father's past as his mind and memory both fail him. It is so much more then just her story. This is the story for anyone who wondered what secrets a family locked away. It is a story of finding ones own self as much as finding the truth.

Too much of an interesting thing

I found the first 3/4 of this story to be engaging, even compelling, in some parts. Franks did deep into the family relationships that encircle her father. She remembers her intense love for him and his sweet protection and teaching of her as a little girl. But family life later disintegrates and her father becomes dependent on her. Her love, rage and disappointment tangle them up and this story is the gradual unknotting of their relationship.

Franks is driven to know about her father's war time efforts. She uses her investigative reporting skills to uncover his story, initially against his will. This eventually draws them together. For me, the story finishes before the book does. The near final chapters tell of her continued search for details to get the full truth of his covert experiences. I was happy ending it with the details he shared and the meaning she made of them. I lost interest in the final verification of the same. It left me thinking: What is more important - The "real" truth or the meaning we make of our own truths?