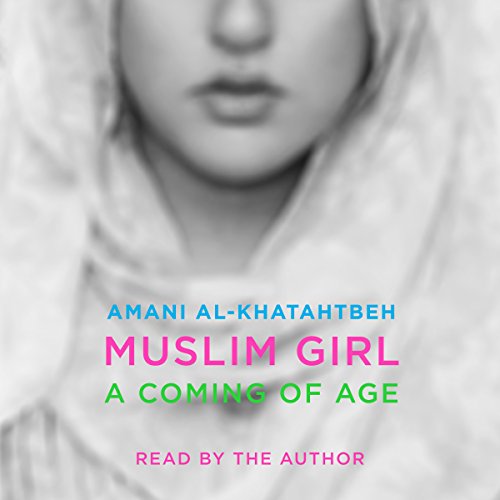 Required listening from the founder of MuslimGirl.com - a harrowing and candid memoir about coming of age as a Muslim American in the wake of 9/11, during the never-ending war on terror, and through the Trump era of casual racism.

At nine years old, Amani Al-Khatahtbeh watched from her home in New Jersey as two planes crashed into the World Trade Center on September 11, 2001. That same year she heard her first racial slur. At age 11, when the United States had begun to invade Iraq and the television was flooded with anti-Muslim commentary, Amani felt overwhelmed with feelings of intense alienation from American society.

At 13 her family took a trip to her father's native homeland of Jordan, and Amani experienced firsthand a culture built on pure religion, not Islamic stereotypes. Inspired by her trip, and after years of feeling like her voice as a Muslim woman was marginalized and neglected during a time when all the media could talk about was, ironically, Muslim women, Amani created a website called MuslimGirl. As the editor in chief, she put together a team of Muslim women and started a life dedicated to activism.

This is the extraordinary account of Amani's journey through adolescence as a Muslim girl, from the Islamophobia she's faced on a daily basis to the website she launched that became a cultural phenomenon to the nation's political climate in the 2016 election cycle with Donald Trump as the Republican nominee. While dispelling the myth that a headscarf makes you a walking target for terrorism, she shares both her own personal accounts and anecdotes from the sisterhood of writers that serve as her editorial team at MuslimGirl. Amani's honest, urgent message is fresh, timely, and a deeply necessary counterpoint to the current rhetoric about the Middle East.

What listeners say about Muslim Girl

I adore you for telling people the story of a Muslims life, to explaining how different and difficult day to day is in this Society I enjoyed this book so much and not because you told your story but because you didn't let anybody stop you from doing what you wanted to do! I pray this world changes and we come to realize that everyone is unique and deserving of what ever they want in life

beautiful read. it was like hearing my young muslim girl self. Muslim girls are so powerful.

As a recent revert to Islam, I wanted to learn more about the lives of Muslim women from their own perspective as I will one day marry a Muslim woman and also the possibility of having a daughter. I have been trying to understand in the future how I will raise Muslim girls who can be strong, successful, and brave women. While living in a society that is strung against them. Because I grew up a Christian, I have been at a loss when I think about the possible task. This book has opened my eyes, my mind, and my heart. It will be a book my daughter reads. 1000 Salams - @WhoIsDominic

Expected a contemplation of Muslim self in society

Expected a contemplation of Muslim self in society. Instead a jejune mix of muah, gush and self promotion.

I loved this book for the raw description of the insecurity many young women encounter while growing up. The compounded persecution she encountered then and now makes my heart weep. I will reread this book many times to remind myself that powerful women are to be applauded, that when ignorant people say ignorant things they must be corrected or called out for their ignorance and that standing up for ones convictions is not enough, one must strive to educate so that we can grow closer in this world. Hearing the authors voice is wonderful but I will be buying hard copies to put in my Little Free Library to send out into the world.

I was angry at the beginning... not because it was a book about Muslims but because I heard 1 line that offended me. I turned off the book for a day to digest it before returning. why did I allow myself to be offended by this book? I wasn't truly listening to her message.
I forced myself to listen to every word and really think about how it affected the writer. she lived her story, not me so I had to take away my judgement.
this incredible woman wrote from her soul. every sentence was a piece of her exposed. every woman should read or hear this book. every girl should.
Amani is a strong voice for women around the world.

Couldn't wait for this book to be over

Amani is trying to re-write history. Oppression of Muslim girls and women is not inflicted by western culture but rather by the centuries of Islamic culture.
She ended each chapter with anger and hatred toward western culture, "white men & white women". I chose to read this book hoping for a better understanding of Muslim girls as I have two nieces and a sister-in-law who are Muslims. My Muslim sister in law has pursued her education at the encouragement of her white husband and our white family. Unlike my sweet Muslim nieces who's Muslim father have held them down, was against higher education and used them as his property. He was extremely cruel to my sweet sister who is now deceased. He sold one of his daughters to be married at age 16. These girls are Muslim Americans!!! It has been my first hand experience that Muslim girls are victims of their own culture more so than that of western culture.