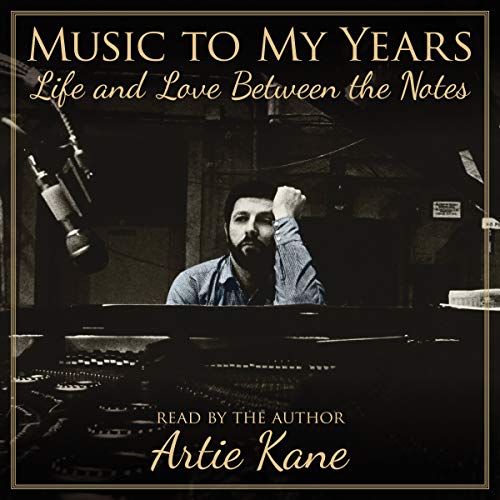 Music to My Years: Life and Love Between the Notes

From radio to scores of TV and movie soundtracks, Artie Kane's music has touched and inspired millions of people.

In his newly released memoir, Music to My Years: Life and Love Between the Notes, he captures the romantic side as well as the unrelenting perfectionism demanded in the entertainment industry. Mr. Kane conducted scores for over 60 motion pictures, wrote music for over 250 television shows (Wonder Woman, Vegas, The Love Boat, Hotel, Dynasty, Matlock, Question of Guilt, Man Against the Mob) and seven motion pictures, such as Looking for Mr. Goodbar, Eyes of Laura Mars, Night of the Juggler, and Wrong Is Right.

Artie Kane, with candor and acerbic wit, recounts his quest to find love through eight marriages as he pursued his dreams as a pianist. His memoir is infused with provocative and poignant stories about the celebrities he worked with and gives an insider's look at Hollywood culture, films, and TV shows of the last five decades. Music to My Years captures the romantic as well as the rough-hewn and unrelentingly perfectionist sides of the world of professional entertainment. For the love of music, and in a quest of love through eight marriages, Artie reimagines his dreams and, with characteristic candor and acerbic wit, proves that the American landscape thrives as a place for misfits who follow their dreams to success.

Music to My Years is also the story of the ever-changing world of professional entertainment, told by an artist whose talents helped to define the transformative era. This memoir will delight and inform lovers of music, fans of Hollywood culture and films, and devotees of TV shows of the last five decades and resonate with anyone who has pursued a dream or struggled to find true love.

What listeners say about Music to My Years: Life and Love Between the Notes

An inside look into the Entertainment industry

This is a great insiders look into various aspects of the Entertainment industry....... it is told with humanity and in a manner that will make you feel like you are sitting with an old friend.

It you want an insight into a talented and interesting man then download this Audio Book and be not only entertained but moved.

Music to my years

I really enjoyed this book!I had never heard of Mr Kane before but found his life fascinating! His narration was also terrific! I was given this book by the narrator,author or publisher free for an honest review.

Great story of a composer

This is a lovely story about a composer and his life story while composing music. This book is a great read of one man's personal journey through life.

My commute passed much faster, and I think I'm a better person for the book. Recommended.