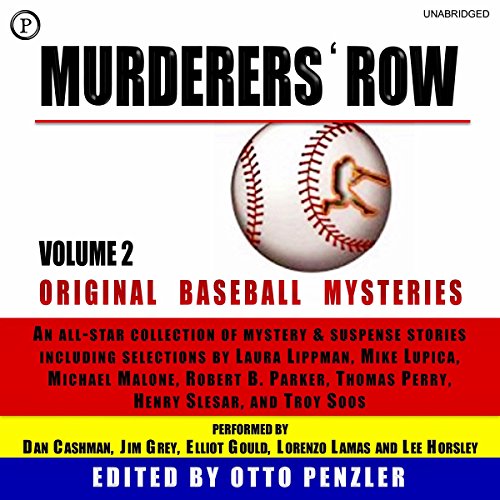 Seven original baseball short stories in the mystery and murder genres, written by an all star lineup of writers, each of whom understand the game's lore and tactical nuances as well as its deep roots in American life. Compiled by Otto Penzler, the proprietor of The Mysterious Bookshop in New York City and regarded as the world's foremost authority on crime, mystery and suspense fiction. Stories include:

"Ropa Vieja" by Laura Lippman - A rich and reputedly respectable eye doctor goes to criminal lengths to promote his success in rotisserie baseball.

"The Shot" by Mike Lupica - Even after nine years, a pitcher is unable to escape the crushing burden of his rotten pitch during a crucial game.

"The Power" by Michael Malone and read by Lee Horsley - A tough guy contemplates life, women, Plato and baseball in prose.

"Harlem Nocturne" by Robert B. Parker and read by Dan Cashman - Parker vividly evokes the character of Jackie Robinson as he breaks the color-barrier. Follow the immortalized Robinson and his pals as they find themselves in a run-in with the mob.

"The Closer" by Thomas Perry - Hilarious yarn of a flimflam man who successfully utilizes his talents as owner of a major league club.

"Baseball buffs will run to their baseball encyclopedias to check whether famous episodes on the field actually happened as portrayed here. In all, this is a book with as much charm as harm." ( Publisher's Weekly )