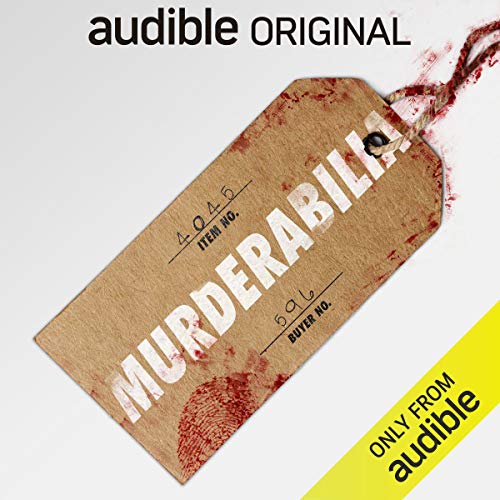 What listeners say about Murderabilia

I've been listening to Audible for years but only recently began branching out into podcasts and so far I've enjoyed many of the titles offered. Considering, this one was absent of reviews, I typically would have skipped it in favor of another but something told me to give this a chance. I'm glad I did. These two ladies did an outstanding job in all areas! In my opinion, Murderabilia is well produced, has an engaging subject, an balanced blend of humor vs solemnity, all without seeming to hold particular or judgment towards the subject matter. My only complaint is that the series was only six episodes, and over too quickly. Great work Poppy & Alice, keep it up, and I hope to hear more collaborations of this caliber to come!

This pair of middle class millennials are annoying, judgemental and do not have the necessary edge for the subject. They had access to some interesting people but failed to engage with them and just sounded like a pair of public school girls with no experience of life. I learnt nothing new and they came to no real conclusion so it was not really a journey - just an utter waste of time.

This seemed like a good premise for a podcast but it ended up like a slightly drawn out student project - the six episodes could easily have been four and the repeated intro for every episode was too long and totally unnecessary. Content-wise it isn't anything ground breaking, and they essentially come to a thirty second conclusion at the end of the fifth episode.

Oddly, the best episode is the sixth 'bonus' episode where they say very little and let others do the talking. This is both the most interesting and informative episode.

What should have proved to be an insightful and sensitively produced podcast ended up with the two women coming over as hypocrites. Turning up their noses at some aspects, while at the same time excusing their *own* fascination with the subject in hand. Then again, listening to both the victim advocate as well as the dealers, a valid point is made. Namely that we ALL deal in murderabilia in one way or another. Be that buying a book, going to the movies or buying a personal item handled by a murderer: we are ALL ghouls. I mean, even THIS podcast is profiting on the very subject matter that the two casters themselves have a fascination.

Overall, I'm disappointed. This could have - and should have - been done by non-hypocrites.

This is such an original, thought provoking concept for a programme. It's full of interesting content with very little padding, unlike lots of true crime podcasts/shows. Really liked how the hosts explored the subject from all angles and tried to remain inquisitive and open-minded while also expressing their mixed feelings towards the industry. It takes some skill to approach a morally complex subject like this and treat it with sensitivity, not jumping to conclusions or trying to simplify it down to good v bad. I particularly liked the bits where the hosts were able to point out the inconstancies and blind spots of their interviewees, to challenge their beliefs and actions.

Really interesting programme, well made. More like this please.

I found this series very interesting, although it does have some annoying flaws. I didn't like the pretend dialogue between the two creators, which was obviously scripted, and certain bits were utterly pointless. Why did we need to know that one contributor didn't get back to them straight away? It's completely irrelevant.
And given that the programme generally looks down on the idea of buying and selling murder-related items, I found it ironic that the creators justified their own purchase of an item (for journalistic reasons, of course...) Strangely, neither of them seems to have properly read the website listing from which they bought the item - for just $10 they expected to receive an original letter written by murderer, rather than the copy they received. If they pay such little attention to something like that, it does make you wonder about the rest of their research.
But overall, the series is well-made (apart from one episode with acknowledged sound issues) and informative, so it was well worth a listen.

Not bad, the repetitive beginning was almost too much to handle though! Good knowledge and well researched but can get a bit cringy at times.

Very interesting series looking at the philosophy and morals around sourcing, collecting and selling artifacts connected to murderers. Well researched and presented. I'll probably give this a 2nd listen.

It was alright and fast listen as there weren't that many episodes. Entertaining but it wasn't really anything special, felt it was more of people who buy Murderabilia than the Murderabilia itself.

Didn't bother to finish this because episode 2 was missing an episode 3 just sounded annoying and repetitive.

I was really fascinated by the trip into the psyche of people who buy murderabilia. The podcasts were balanced and the authors/narrators shared their own thinking and journey throughout the process. I am hoping there is a second series.

Poppy Damon and Alice Fiennes provide a fresh and entertaining perspective on the nitty gritty of crime and he human psyche. I binged the entire series in one go, and have recommended it to all friends and family. If you liked Serial, and nerd out on psychology and why we do the things we do, then this is for you! Go! Listen!