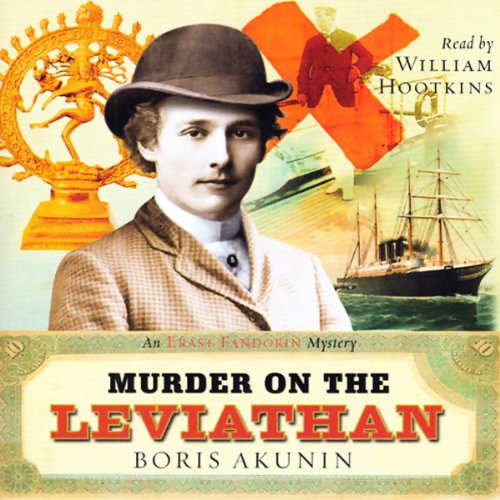 Murder on the Leviathan

By: Boris Akunin
Narrated by: William Hootkins
Try for $0.00

On 15 March 1878, Lord Littleby, an English eccentric and collector, is found murdered in his Paris house together with nine members of his staff. A gold whale in the victim's hand leads Erast Fandorin to board the Leviathan, the world's largest steamship, as the murderer is one of the 142 First Class passengers. Commissioner Gauche of the French police has narrowed down the suspects to 10, and they are forced to eat together at every meal time in the ship's Windsor Suite until "the Crime of the Century" is solved.

But is the murderer really sat around the table, and can Erast Fandorin discover his or her identity before Gauche? As more passengers are murdered and Leviathan heads towards Calcutta, Fandorin needs all his investigative skills to find the truth. Boris Akunin's latest thriller again transports the reader back to the late 19th century. In Leviathan, he pays homage to Agatha Christie with a cast of characters and plot which grips you from the first page.

What listeners say about Murder on the Leviathan

Not quite as good as the Turkish Gambit, but still warrants five stars - Erast Fandorin is the perfect gentleman detective - and William Hootkins narates the story in just the right way to keep you listening to every word.

Loved this book and the first in the series. Hurry up and record more Audible.