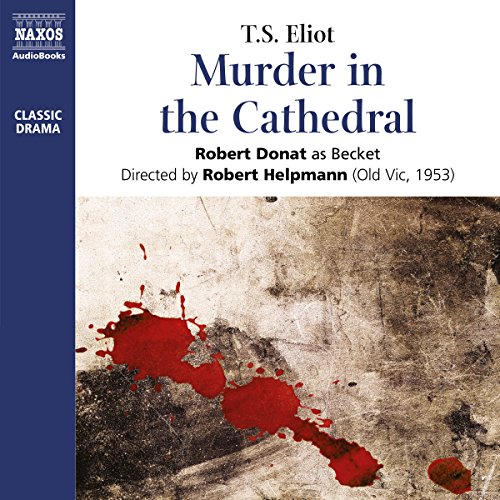 Murder in the Cathedral

T.S. Eliot’s Murder in the Cathedral is both a fascinating retelling of the 12th-century assassination of Archbishop Thomas Becket and a compelling call for resistance in the face of intimidation. Written against the backdrop of rising Fascism in 20th-century Europe, Eliot’s classic verse play is as relevant now as it ever was.

This re-release of the original 1953 recording stars Robert Donat, whose commanding performance as the Archbishop, alongside a full cast, is widely celebrated.

What listeners say about Murder in the Cathedral

Great work of a Great poet

the play is the best of the plays of the writer and charcters are lively, one can visualize the acts while listening.

Murder in the Cathedral

Would you consider the audio edition of Murder in the Cathedral to be better than the print version?

Could really get a picture of the reasons why Beckett was assassinated and the guilt of the King..

What was one of the most memorable moments of Murder in the Cathedral?

The point where Henry II curses about the archbishop and asks why nobody would kill him.. I can feel that moment..

Enjoyed it very much, a favourite in my collection..