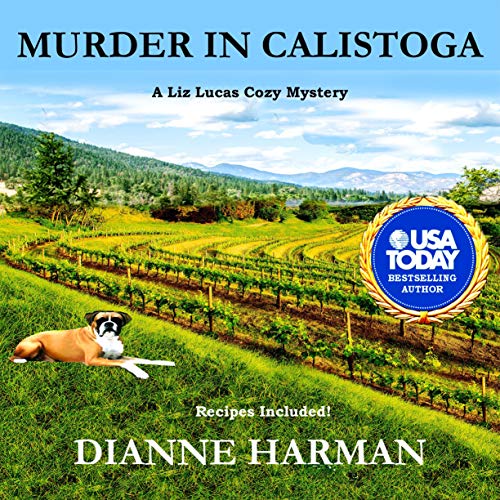 By: Dianne Harman
Narrated by: Kasey Logan
Try for $0.00

Just the thought of being locked in a sauna and dying....

When Nikki Evans is murdered in the sauna at the Serenity Hotel and Spa on opening day, Judy Rasmussen’s dream of owning a premiere hotel and spa in Calistoga, California turns into a nightmare.

Her friend, Liz Lucas, an amateur sleuth who’s come to the hotel and spa for the opening weekend, has to find the killer before the new hotel and spa’s chances for success are ruined by the bad publicity the murder will bring.

But who would want the reunion attendee dead? And what's the motive? Was it her college roommate, who’d never forgotten what Nikki had said about her years ago? Was it Nikki's husband, who resented he had to use her inherited money to pay back the company he’d embezzled from? Was it the winemaker who wanted Judy’s property, so he could grow more grapes? Or was it the owner of La Spa, who didn’t want any new competition in town?

Join Liz and her big boxer guard dog, Winston, as they try to catch the killer, but will they succeed?

This is the seventh book in the popular Liz Lucas Cozy Mystery series by a two-time USA Today best-selling author.

What listeners say about Murder in Calistoga

This audiobook is excellent! I give it a five star rating. A boutique hotel, spa, wine, and good food are part of a unique storyline set in Calistoga, CA. Listeners can picture themselves being there, enjoying the delights of a relaxing and scenic vacation.

A group of friends travel to the opening of a small boutique hotel for a destination reunion. Unfortunately, a murder occurs, which certainly puts a damper on their stay. This is a well thought out cozy murder mystery. The characters seem very real.
Several suspects are unveiled, along with possible reasons for committing the murder.

Liz Lucas and her husband are at the hotel for a getaway weekend and help the police with the investigation. Their dog accompanies them and adds to the plot.

I would highly recommend this audiobook to others.

MURDER AT CALISTOGA is the 7th in the Liz Lucas series, by Dianne Harman. All can be read separately. Again Dianne doesn't disappoint, those of us, who look forward to the next new book of hers. A spa and beautiful setting for Nikki, to unwind, and ponder what to do. Damon, husband, embellisher, having to move, she paid the money, so he wouldn't go to jail. Now, it seems like she is in jail, with the tension, arguments. We have Napa Valley, wine and gourmet foods, Roger and Liz, enjoying the day. A call from Judy, where they were going to stay later, asking them to come now, a murder. A great plot, as you try to figure out, and enjoying the process of who it was and why. Another delightful audio that captures you from the beginning. Kasey narration was good of bringing the story to life. Well done and enjoyed

fantastic as always , great story lines and characters make this such an enjoyable audiobook xxxxxxxxx

A great cozy mystery, quite short but well written, my only quibble is that everyone fall over themselves to tell all, no-one says none of your business, but this is minor. Interesting characters and good plotline. Good narration

Relaxing can be murder

I enjoyed this book This is another great book by this author full of mystery and suspicion. This is book seven in the series but it can be listened to as a stand alone or part of a series, either way it is great. There are plenty of suspects and you are even guessing who the target is in this book. Not sure the police chief would really go away on holiday and leave the investigation to an amateur sleuth but it work well in this book. The characters are interesting, if a tab bit food obsessed but then then again you do get the recipes at the end of the book. Winston the dog is a firm favourite in the series and he proves once again why. Looking forward to the next book.
When Judy opens her hotel and spa her first guest include her friend Liz and her husband Roger. Which is a good job because the other guests are a group of old college friends, who of whom is found dead in the spa. Amateur detective Liz steps in to investigate when the police chief finds he is committed to be else where. With her friends reputation and business on the line Liz and her emotional support dog Winston (well he has got a certificate) start with the group of friends. It soon becomes clear that Nicki might not have been the target, just in the wrong place at the wrong time. Who will Liz find out the real motive behind the death and can she do it without putting her life in danger?
I like the narrator and think she used her voice well to give the different and many characters a voice.
I was given this free review copy audiobook at my request and have voluntarily left this review.