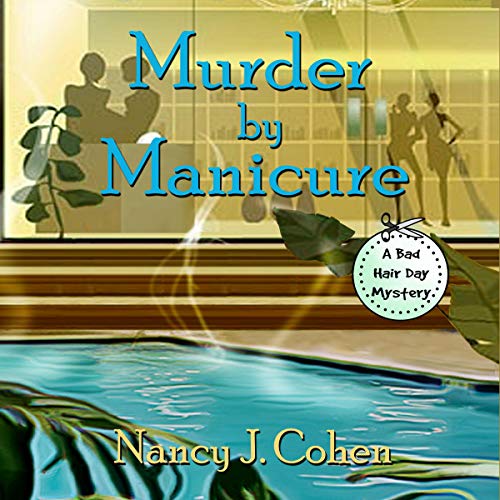 Hairstylist Marla Shore joins a fitness club to get in shape, but discovers a dead body instead of an exercise routine. Jolene Myers, a client at Marla's salon, has drowned beneath the frothing waters of the whirlpool.

When Detective Dalton Vail determines Jolene's death was no accident, Marla decides to give her deductive skills a workout and help solve the case. Jolene had few friends at the fancy athletic club.

As Marla gets to know everyone, she wonders who might have targeted Jolene for a lethal soak in the hot tub. When another member turns up dead, she intensifies her efforts to nail the killer and wrap the case. If she fails, the next buff body on its way to the morgue might be hers.

What listeners say about Murder by Manicure

This is a fun, quirky cozy series. The heroine is Marla a cosmetologist who owns a beauty saloon. She has a way of literally stumbling upon dead bodies. She is divorced from a verbally and emotionally abusive husband and has major commitment issues. Also she has a mission regarding campaigning for pool safety such as locked pool fences and early swimming lessons for children. When she was a young college student her toddler charge escaped from his play pen and fell into and drowned in the backyard pool while she was on the phone. The guilt still plagues her, thus she doesn't want to be a mother or be in charge of children.

The story is good though not quite a full 4 stars but better than three stars, which made it hard for me to rate. The narration however is excellent and made the book.

Also, my mouth started watering when Marla was talking to a friend and making Kugel. I really wish that there was an recipe attachment to the book.

In conclusion, If you like cozies with quirky characters and some fun, then this book would be a great choice.

This was a cute, fun book. Seems Marla cannot stay out of trouble. Murder seems to follow her around. I look forward to reading more in this series. I have read book 1 and 3 and look forward to going back to read book 2. I received this book free in exchange for an honest review,

I really enjoyed this mystery, I loved the narration and this certainly made a drive much nicer. I like the interaction between the main character and her &quot;police boyfriend&quot; and I liked that there were a few surprises along the way. It was light yet got the animal testing message in there. I will definately listen to the others of this series.I received this audiobook at no-cost from Audiobookworm Promotions. The gifting of this audiobook did not affect my opinion of it.

An entertaining, engaging and comical mystery!

Murder by Manicure is a fast-paced, short comical mystery. As a light mystery, you get the enjoyment of a mystery tossed in with some humor and charm. The story is full of suspense and unplanned explorations. I thought this book was unique and amusing with some unforeseen twists. This is the third book in the series but is definitely a standalone. Not having read the previous books in the series, this book did not have the feeling that I missed anything. They are unique and individual stories.

Mary Ann Jacobs did a good job with the narration. She had a clear and crisp voice that was easy to follow. She brought great tone and delivery. She helped bring the story to life. It was enjoyable listening to her narration.

This was a nice and entertaining cozy mystery from Nancy J Cohen. It will certainly not be my last read from her. I was not disappointed at all. I recommend Murder by Manicure to anyone that enjoys cozy and entertaining mysteries.

I received this audiobook free for an honest review. This book has a similar theme to the previous books, however, there are some very interesting twists that will keep you on your toes. This book is neither a romance, a thriller, or suspense, it is all three and more. The narrator did a great job with the characters that only enhance the already great story.

Great story by Nancy J Cohen. Mary Ann Jacobs did a charming performance. Even though I was voluntarily provided with this review copy audiobook at no charge by the author, narrator, and or publisher, this is just the kind of book I would use a credit for because I like light mysteries with charm and snark.There were some unexpected twists which made me sit up and say &quot;Wow&quot;.

I will be looking into this story further, and I recommend it for anyone looking for a mystery with some personality, action girl power.

Murder by Manicure is another solid entry into The Bad Hair Day Mysteries. This is book three in the series. It is not necessary to listen to the first two stories, but it helps with the continuity of the characters.
Marla Shore is a hairstylists with a penchant for solving murders. Of course, there is the requisite hunky detective and mildly kooky acquaintances. In this story Marla is present at a day spa murder and, as usual, is involved in solving the mystery. These Bad Hair Day Mysteries are a cut above average in the amateur sleuth genre .
The narration is great. No cringing at gender transitions.
I was voluntarily provided this review copy audiobook at no charge by the author, publisher and/or narrator.

I was voluntarily provided this free review copy audiobook by the author, and found it very entertaining. The characters are very interesting and well written. A hairdresser teams up with police detective friend to solve a murder of a client. This fast moving tale is full of suspense as unplanned misadventures add to the mystery, they're trying to solve. I will be checking out more books in this series.

She can't believe her client is dead.

Marla and the crew are back. I am really liking this series. When Marla decides she needs to get in better shape, she meets one of her clients at the club. All of a sudden, her client is dead and of course Marla can't let it go. Not only is she running a business, she has a fake fiancée, helping Dalton with his daughter and trying to solve several murders. Where does she find the time?

Where does Murder by Manicure rank among all the audiobooks you’ve listened to so far?

It Wasn't A Plot That Blew My Mind...But The Characters Were Likable And Had Some Funny Moments..There Were A Couple Of Unbelievable Events When I Thought The Author Could Have Expanded The Reading Audience Mind By Creating Events That Were More Believable

What about Mary Ann Jacobs’s performance did you like?

I Really Liked This Narrator..She Brought The Characters And Story To Life..

Yes It Was...A Classic Who Done It Mystery