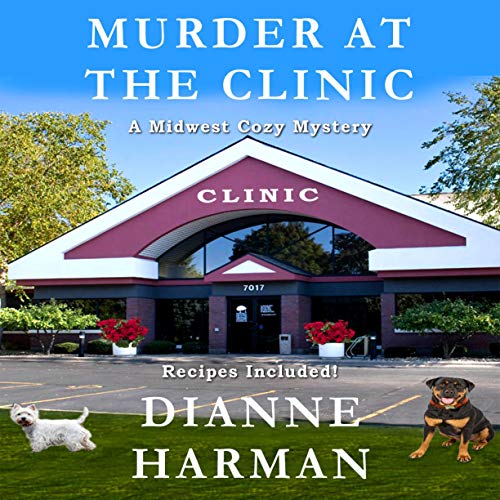 Murder at the Clinic

By: Dianne Harman
Narrated by: Talmadge Ragan
Try for $0.00

Dead patient at your clinic. End of your dreams of happy-ever-after?

Kat Denham, a popular author of steamy romance novels, has decided to write a book in a different genre. She has a friend who's a doctor of acupuncture, has just lost over 100 pounds, is getting married in mid-life for the first time to a doctor, and seems like the perfect role model for the protagonist in Kat's soon-to-be-written book.

But fate intervenes when Kat happens to be at the acupuncture clinic when a patient mysteriously dies. Suddenly, Kat is involved in a murder mystery she has to solve to save her reputation and that of her friend, Mitzi.

Who was the murderer? Was it Mitzi, Kat's acupuncturist? Or was it a doctor from the clinic who desperately wants Mitzi discredited, so he'll be named the Assistant Dean of Acupuncture?

Then there's Sandy's philandering husband, Matt, and Mitzi's fiancee's ex-girlfriend. Or was it the clinic's receptionist, Rochelle? Will the sting Kat devises to help catch the murderer work? And what part does Kat's guard dog, Rudy, play?

This is the second book in the Midwest Cozy Mystery series by a two-time USA Today best-selling author.

What listeners say about Murder at the Clinic

I really enjoyed this book. I think this is one of Diane Harman's better mysteries, although I do tend to enjoy them all, this one clicked for me. I think it's because the story concentrated on the mystery rather than what was going on in the kitchen. I like the fact that the main character is an author, it sets this character apart from the authors other series (were food is involved and included in the books). The well trained guard dog is included but I think it is the twists in the mystery that I like best. You were guessing the whole time who the target was and with plenty of suspects and motives for all the scenarios I never did come up with the right killer. Acupuncture also made for an unusual subject but it worked well in this mystery and I like how they had a hard time figuring out how the victim was killed or where. Lots of guessing going on in this book, so plenty of mystery.
After a lunch with an old friend Kat Denham decides to break away from writing romance books and try her hand at writing a cozy mystery loosely based on her friend and her job as an acupuncturist. She had no idea that by doing so she would become a murder suspect when fiction becomes reality and one of her friends clients dies. Kat will need to hire her boyfriends brother to help get them both out of hot water this time when it turns out she was poisoned. The problem is how was she killed? An accidental overdose? Or was it more deliberate?
This is the first time I have heard this narrator but I thought she put in a solid performance and I would choose to listen to her again.
I was given this free review copy audiobook at my request and have voluntarily left this review.