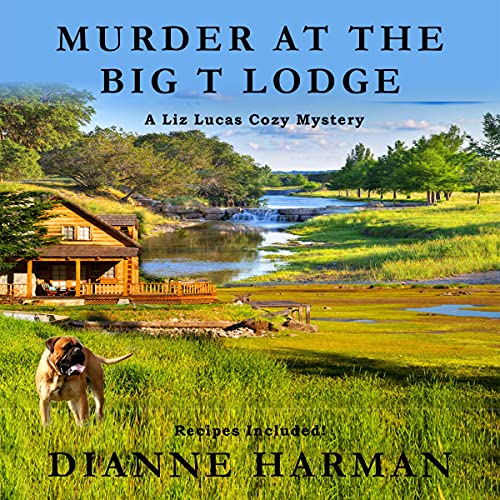 Murder at the Big T Lodge

By: Dianne Harman
Narrated by: Anna Wheeler
Try for $0.00

What could go wrong at The Big T Lodge, the most expensive and prestigious hunting club in the United States? Well, murder for starters!

When Roger tells his wife, Liz, that they're leaving for Texas in three days for an unexpected hunting trip at the club, neither of them has a clue that Liz will spend most of her time looking for the person who murdered Roger's law school friend, Milt Huston, who just happens to be the Attorney General of California and is a candidate for Governor of California.

There's no lack of suspects, but who did it, and what was their motive?

Anger from Milt's former lover? Revenge from the lover's husband? Milt's proposed cigarette tax increase despised by a North Carolina tobacco farmer? The California Senator who wants to be Governor of California? Or the chef's assistant who hates Milt's liberal views?

Join Chef Wes, Liz, and her new doggie friend, Sam, a huge bullmastiff, as they search for the murderer and the motive.

What listeners say about Murder at the Big T Lodge

A hunting trip for Roger and his friend, with Liz deciding to go along with her husband Roger.. Murder happens and the owner doesn’t want to deal with it. Probably wishing it would disappear, at this beautiful exquisite lodge. Once again Liz turns her hands to see what happened, and who knew they would be here. The sixth in series, can be read and listen to alone. Given audio for my voluntary review Which had gone narration

Hunting for a killer

I enjoyed this book. What would the world do without Liz Lucas to solve all the murders? Or even without Dianne Harman to write them? Be very bored, that's what. This is another great example of why her series have such long runs, this series contains thirteen books so far, Northwest Cozy Mystery Series is at sixteen, Murder in Cottonwood Springs is at 14, High Desert Cozy fifteen and all of them contain love able dogs, great characters, good mysteries, tasty recipes and lots of suspects. Keep them coming.
Liz finds herself invited to a prestigious hunting club which is booked up years in advance when a member drops out and her husband Roger is offered the place. Liz isn't interested in hunting but with the prestigious lodge comes there very own chief and she might get some new recipes to try out on her own customers. Before she can even whip up a meal , Roger's law school friend is found dead. The owner of the lodge doesn't want the reputation to be blemished and is quick to hush it all up by telling the other guests the dead man had to leave early. He even asks Liz to notify the family. Liz is quick to suspect fowl play and secure the crime scene and starts to investigate by questioning everybody that could have had a motive. Can she find the evidence to prove he was murdered? And convince the lodge owner there is a killer walking about?
I like the narrator. She has read a number of this authors books and always puts in a good performance.
I was given this free review copy audiobook at my request and have voluntarily left this review.

Another well written murder mystery from the pen of Dianne Harman, Liz and husband Roger go for an enjoyable break to an exclusive Lodge complex and once again a death takes place and Liz is the only person that suspects foul play.
Follow her adventure to unravel the mystery and uncover the suspect.
Never a dull moment.
The narrator has a nice clear voice.
I received this audiobook for free from the author and wanted to give an honest opinion.