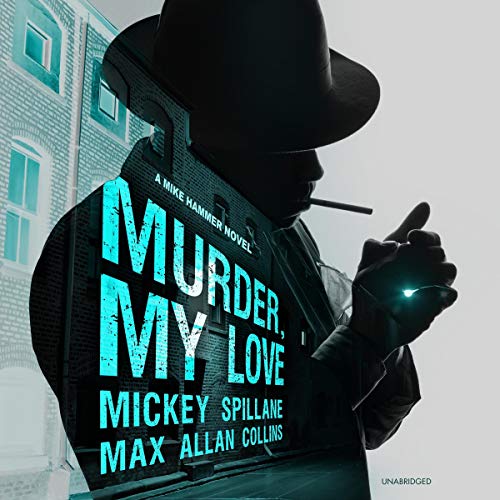 Mike Hammer is summoned to a meeting with Jamie Winters, a US senator from New York, and Jamie's lovely, very smart wife, Nicole, considered by many to be the power behind the throne. Winters is being blackmailed, and Hammer is given a list of suspects who may be behind the threats to the senator's career. But when the suspects begin to drop like flies, Hammer realizes there is more to this case than just a salacious tape.

What listeners say about Murder, My Love

Still, Hammer, after all these years

Max Allan Collins continues his run of completing Spillane's outlines, unfinished manuscripts, and plans for additional Mike Hammer novels. This is modernized pulp, but if you understand that going in, it can be a great deal of fun. Also, the narrator does a fine job performing the story even if he isn't Stacy Keach. How Hammer is it? I could almost.... almost hear the soulful strains of "Harlem Nocturne" which was used for years as the theme for the TV movies and show in the 1980's.

Stacy Keach should have read.

would have been better if Stacy Keach had been the narrator. Story was very good though, hard to stop.

I was very excited for this new Mike Hammer Mystery. Max Allan Collins does a great job of continuing the Mickey Spillane adventures. Like it says in the forward this one is a little more like the tv series compared to some of the “revenge” novels. I hope Max keeps writing them because they just keel getting better. I was also excited to see Stefan Rudnicki being the new narrator following John Dan Miller and of course Stacy Keach. Stefan has an amazing voice and is a perfect choice to take up the Mike Hammer mantle. I highly recommend this new Mike Hammer mystery!

In this one Mike Hammer is around 60 years of age and engaged to Velda while being true to her all the years. Still he gets involved with a case along with Velda that brings all the old action back.

At the beginning of the book, the other author, Max Allan Collins, explains how he got involved with finishing all the unfinished Hammer books.

It turns out that at some point Mickey Spillane became a Jehovah’s Witness. The church really cracked down on the elements of his books that didn’t fit the fate. Still he had the Hammer writing bug and he would come up with an idea for a new book and start writing although sometimes there was nothing more than a synopsis. So when Collins agreed to tidy things up he didn’t realize how many books there were and all the different stages they were at. Still he had made the agreement, stuck to it and did the best he could in finishing up the books while staying as true to the Mike Hammer character as he could.

If you like the 'Mike Hammer ' series this is a little less sanitized but a great story. What starts as blackmail of a politician leads to several murders.

If you like private eyes, this is the one. Especially the readers deep voice which give the player’s character!

it's just not Stacy Keach as Hammer.

still loved the story ❤. Mike Hammer books are my favorite.
but this narrative just didn't have the same kick.

It had enough mystery to keep me interested. I finished it fairly quickly and enjoyed it.

This is my first Mice Hammer novel. It was much better than I expected. It included all the necessary ingredients for a well told story and some soft erotica
I would recommend to anyone.

The story wasn't too convoluted, I liked the pace and style of the narration. Looking forward to the next story