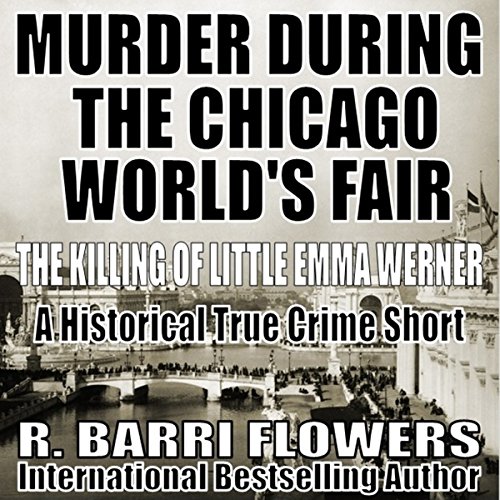 Murder During the Chicago World's Fair

By: R. Barri Flowers
Narrated by: Norman Gilligan
Try for $0.00

From R. Barri Flowers, award-winning criminologist and best-selling author of Murder at the Pencil Factory and Murder of the Banker's Daughter, comes the powerful historical true crime short, Murder During the Chicago World's Fair: The Killing of Little Emma Werner.

On Tuesday, May 9, 1893, seven-year-old Emma Werner was the victim of a brutal and lethal attack in Chicago, Illinois. The dreadful murder came at the start of the city's much ballyhooed 1893 World's Columbian Exposition, also known as the Chicago World's Fair. It coincided with the heinous crimes of ruthless serial killer Herman Webster Mudgett, who went by the name H.H. Holmes and built a hotel called the World's Fair Hotel to house and profit from the Fair visitors needing a place to stay. The hotel proved to be a veritable death trap for unsuspecting, mostly female, guests and employees alike.

Emma's killer was 21-year-old George Craig, who worked as a painter at the World's Fair. By the time the Fair was over, the mayor of Chicago, Carter Harrison, would be assassinated by Patrick Eugene Prendergast, a disgruntled newspaper worker. And before the shocking final disposition to the murder of Emma Werner could come to pass nearly four years later, Craig and Prendergast would cross paths in jail, Holmes and Prendergast would be executed, and Craig would be set free in what many saw as an unbelievable miscarriage of justice and misguided sense of compassion for the cold-blooded child killer.

The tragic tale of Emma Werner's short life and its chilling convergence with other tragedies against the backdrop of the 1893 Chicago World's Fair is revealed in the pages of this historical and fascinating trip down memory lane.

What listeners say about Murder During the Chicago World's Fair