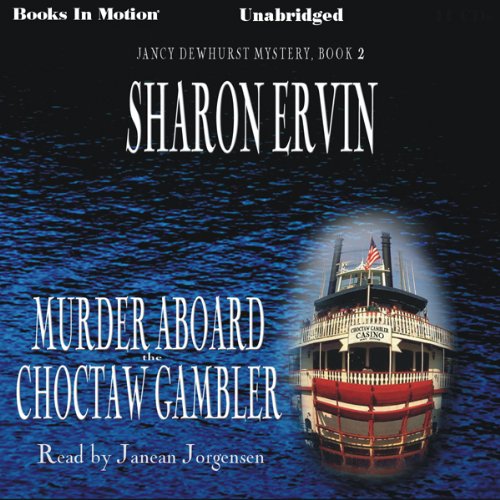 Murder Aboard the Choctaw Gambler

Murder Aboard the Choctaw Gambler

By: Sharon Ervin
Narrated by: Janean Jorgensen
Free with a 30-day trial

When a croupier is murdered on the Choctaw Gambler Riverboat Casino, State Bureau of Investigation Agent Jim Wills invites newspaper reporter Jancy Dewhurst to accompany him to the scene. The dead croupier resembles casino owner Jesse Chase, a former friend and business associate of ranching tycoon Tyrone Gideon. Tyrone’s son G.C., heir apparent to the Gideon empire, has hired a man to murder Chase. G.C. ran up a debt aboard Gambler, refused to pay, and was banned from the facility. He believes the debt and his humiliation will die with his dad’s old friend. Following rumors of G.C.'s spending excesses, Jancy visits G.C.’s elderly father to ask about their possible impending bankruptcy. Frail and blind, Mr. Gideon is surprised by Jancy’s revelations. He has given his son a free hand with his assets, but had no idea G.C. had indebted the ranch for millions. A drunken, raging G.C. interrupts Jancy and Tyrone and orders Jancy to leave. Moments later, G.C. batters the old man, then blames Jancy for provoking him. G.C. orders Bubba Valentine, his bodyguard, to kill Jancy for meddling. He describes in detail how the nosy reporter is to die. Struggling with her contradictory desires--to settle in Bishop, Oklahoma, with Jim or to pursue her career as an overseas news correspondent--Jancy doesn’t realize she’s been targeted for death. She has no idea that her car being run off the road on a rainy afternoon is intentional. The danger finally becomes clear, even to her, however, when a bomb destroys her newly repaired vehicle, killing two kids who had taken it for a joy ride. With Jim’s assistance, Jancy overcomes one life-threatening dilemma only to find herself mired in yet another.

What listeners say about Murder Aboard the Choctaw Gambler