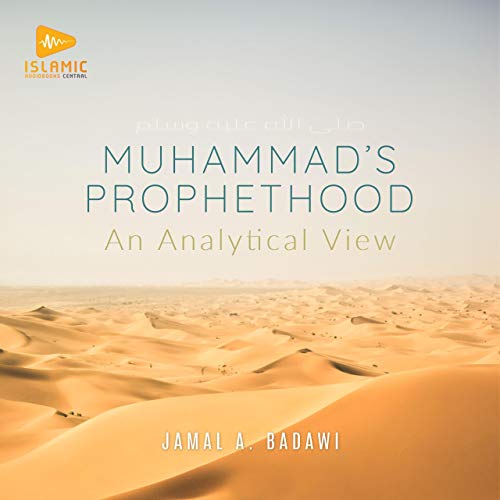 More is recorded about the life of Muhammad, the Prophet of Islam, than any other figure, while at the same time, no other personality has generated more debate than his. Ranked the number one most influential person in human history - not by a Muslim but by a Westerner - Muhammad has become a target for generations of missionaries and orientalists who have aroused suspicions and propagated allegations against the man and his message.

This audiobook explores some of the main issues surrounding Muhammad’s prophethood (peace be upon him).

Was Muhammad a true prophet of God or an imposter?

If he was truthful, did he unconsciously fabricate a religion?

Is the Qur'aan plagiarized from Judeo-Christian sources?

No stranger to both sides' arguments, Dr. Jamal Badawi subjects these issues to rational analysis, steering clear of both blind acceptance and prejudicial rejection.

What listeners say about Muhammad's Prophethood: An Analytical View

Easy-to-follow reason and fact based analysis

This audiobook discusses the question of whether Muhammad صلى الله عليه وسلم was a true prophet of God as Muslims believe.

The author mentions the Islamic claim following it up with non-Muslim scholars' objections and critiques, including the not-so-direct ones that are phrased in the language of public relations and diplomacy. He subjects all possible views to rigorous analysis utilizing the oldest and most reliable tool at our disposal, plain 'ol common sense with plenty of support from generally uncontested historical accounts.

Bearing in mind the work's relatively short length, my overall impression is that the author successfully accomplished what he set out to do, namely an easy-to-follow reason and fact based analysis while avoiding faith based scriptural arguments.