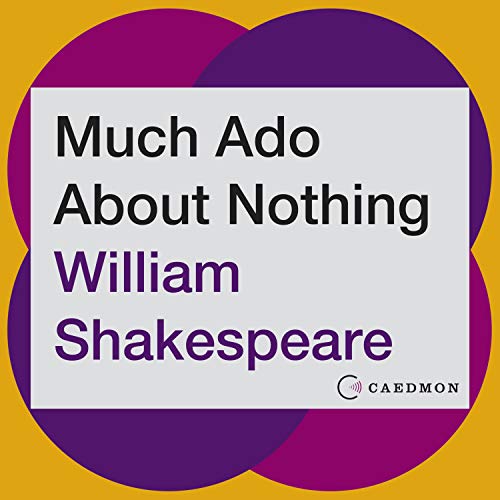 Much Ado About Nothing

In Much Ado About Nothing, Shakespeare created one of the greatest verbal sparring matches in all of literature, echoes of which can be heard in the sophisticated dialogue of such late masters as George Bernard Shaw, Oscar Wilde, and Noel Coward. Throughout the play, the proud would-be lovers, Beatrice and Benedick, circle each other warily, and as they draw closer and closer to their inevitable union, their scathing witticisms and sly innuendoes reach a feverish intensity that befits the passionate longing they both vainly seek to deny. Much Ado About Nothing is at once a sobering examination of dishonesty and deception, and a boisterous celebration of that overwhelming natural phenomenon we call love.
©1964, 1996 HarperCollinsPublishers
Drama Classics Shakespeare Botany & Plants Literature & Fiction
Show more Show less

What listeners say about Much Ado About Nothing

Good performance, but hard to hear

It is nice that there is background noise to the seems however it does become difficult to hear at times. Overall the characters were great and enthusiastic.

Loved the characters voices, fantastic job. This audio book created a real experience for me while I read along. I had to slow it down to 80x though.

Sounds as if it were recorded in a bucket...

Love the play as dated as it is; the verbal sword play between Beatrice and Benedict stunning though merely a blur in this poorly recorded version

This is a 'vintage' recording- 60s or 70s, back when playing Shakespeare was a very serious buisness...

It's very servicable. Full text, good music but rather lacking in charecterisation, lightness and charm.

The BBC version and this sit well side-by-side, the BBC one is quite abridged and tidied up but otherwise superb- a good introduction.
This one gives you all of Shakespeare, a useful 'document'- but might be dull and offputting if this was your first experience of the play.

There is one one funny moment- Beatrice is railing on and Benedick is doing some impromptu interjecting and squeaks 'well- I mean-' in a rather unshakespearian tone- I'm afraid that's as close as this production gets to naturalism.