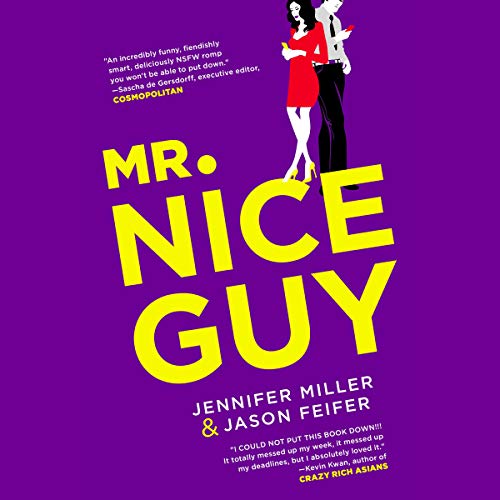 This program is read by Matt Godfrey with the authors. From the husband-and-wife writing duo Jennifer Miller and Jason Feifer comes Mr. Nice Guy, a funny and all too real comedy about the pursuit of success in life - and love - in today's working world.

Lucas Callahan, a man who gave up his law degree, fiancée, and small-town future for a shot at making it in the Big Apple. He snags an entry-level job at Empire Magazine, believing it’s only a matter of time before he becomes a famous writer. Then, late one night in a downtown bar, he meets a gorgeous brunette who takes him home....

Carmen Kelly wanted to be a hard-hitting journalist, only to find herself cast in the role of Empire's sex columnist thanks to the boys' club mentality of Manhattan magazines. Her latest piece is about an unfortunate - and unsatisfying - encounter with an awkward and nerdy guy who was nice enough to look at but horribly inexperienced in bed.

Lucas only discovers he’s slept with the infamous Carmen Kelly - that is, his own magazine’s sex columnist! - when he reads her printed takedown. Humiliated and furious, he pens a rebuttal and signs it, "Nice Guy". Empire publishes it, and the pair of columns go viral. Readers demand more. So the magazine makes an arrangement: Each week, Carmen and Lucas will sleep together...and write dueling accounts of their sexual exploits.

It’s the most provocative sexual relationship any couple has had, but the columnist-lovers are soon engaging in more than a war of words: They become seduced by the city’s rich and powerful, tempted by fame, and more attracted to each other than they’re willing to admit. In the end, they will have to choose between ambition, love, and the consequences of total honesty.

"I COULD NOT PUT THIS BOOK DOWN!!! It totally messed up my week, it messed up my deadlines, but I absolutely loved it.” (Kevin Kwan, author of Crazy Rich Asians)

My expectations were totally different going into this book - I was expecting a totally different type of book and I dove in without reading any reviews. Usually this type of gossipy novel isn’t for me, but the characters and setting and narration hooked me from the start. Definitely a fun and easy read and especially relatable if you’ve spent time living in New York City. Wouldn’t say this is a groundbreaking novel or anything but it was definitely an entertaining read and a novel concept. Wish the lessons of love and communication were explored a bit deeper... Good beach read!