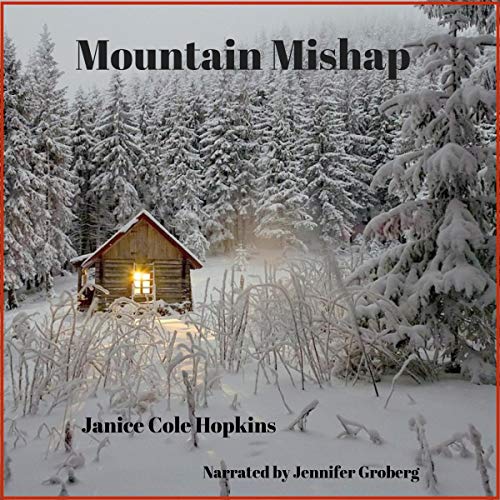 By: Janice Cole Hopkins
Narrated by: Jennifer Groberg
Try for $0.00

Anna Allen grew up in the Charleston Orphan House, but at 18, she must now leave. Her best option is to wed, and when a man from the Appalachian Mountains comes looking for a wife, she hesitantly agrees to marry him. However life with Elbert Ramsey and his father turns out to be miles from her dreams.

In 1851, Levi West decides to go stay with his brother in the Appalachian Mountains. His parents had died, leaving the farm in debt, and a brazen woman had caused a rift between him and his best friend.

Although his sister-in-law’s younger sister acts almost as bad, Levi finds he loves the rugged mountains. When a hunting accident endangers his life, help comes from an unexpected source. Dare he hope for a family of his own or will another woman just disappoint him again?

What listeners say about Mountain Mishap

You Never Know When Love will Find You

Wonderful story and great narration. Anna grew up in an orphanage and when she aged out, she was forced to marry. Elbert was no prize and living with him and his Father, was not a good situation. She becomes a widow, soon enough, but now has to take care of her daughter, by herself in the mountains. When a knock on the door, brings an injured man, she must help him. Levi is the man and she nurses him back. Can this be Gods work? Only time will tell.

basically anna has no choice but to marry the mountain man. she has to find a way to find contentment and trust in the Lord. mountain lion takes her husband. now what choices does she have?

What a great story! Characters to love and some to dislike. Well drawn and realistic.
I can’t recommend this enough.

Anna grew up in an orphanage, but now it's time to leave. The only option available to her is to get married. When Elbert Ramsey chooses her because she's so pretty, Anna accepts his proposal. She hopes they might fall in love. Although Elbert treats her well enough, it's a far cry from what she had hoped for. Through a series of events, Anna finds herself alone with a baby on an isolated farm in the middle of nowhere. How will she and Ellie survive? Anna prays God will help her.

Levi longs to find a godly woman he can fall in love with. That's the only kind of woman he wants to marry. He is a handsome man, so brazen women have thrown themselves in his path wanting to become Mrs. Levi West. But Levi has never felt an interest in those types of women. In the midst of difficult circumstances, Levi and Anna's paths cross. Before long, Levi realizes that Anna is nothing like the women he had met so far. Instead, she is all he could ever hope for. But she has a child. Wouldn't it just be his luck, when he finds a woman who stirs his heart, she already belongs to another man?

This was the third book I've read by Janice Cole Hopkins, and it will definitely not be the last. She is a great story-teller. This novel moves along nicely and is a page-turner. Levi is definitely a hero-worthy main character. After all of Anna's disappointments, is it any wonder she is reluctant to remarry? But Levi is patient and willing to obey God in order to win Anna's heart. Although there is chemistry between the two main characters almost from the start, the relationship develops at a slow and believable pace. The story moves along nicely. This book grabs the reader's attention and doesn't let go until the last word is read. I thoroughly enjoyed Levi and Anna's love story.

This is the first book I’ve read or listened to by Janice! I will definitely be enjoying more of her books!

The narration was good but some of the voices were a bit choppy. Like the narrator was trying to slow down more. I think it would be an improvement if she spoke at a more normal pace. But besides the cadence I thought she did a great job!

Very well-written and narrated story of life in the remote North Carolina mountains in early 1850's. Characters and relationships are developed. The novel moves along at a good pace but it's thorough - I always knew where Hopkins had us. I liked the descriptions and dialogue. Narrator did a great job on the accents, emotions and differentiating the characters. Looking forward to Hopkins' next novel and hope she teams with Groberg again.

This was a great story and I found myself using every spare moment to hear more. The images of life in the mountains in those early days drew me in. I sympathized with the main character at times and wanted to yell at her other times!! Overall it was a brilliant telling of a romantic tale in morally sound way. I recommend this book for fans of historical fiction, fans of romance, and fans of Christian books. More Please!

This book is well written. Had it’s turns off ups and downs, which makes it feel more real. Can’t wait to read more of her books.