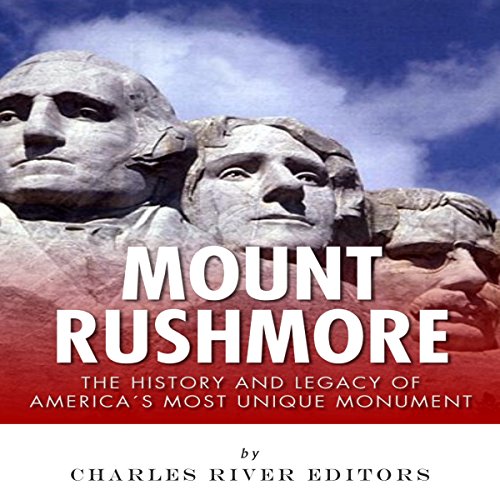 By: Charles River Editors
Narrated by: Neil Reeves
Try for $0.00

"America loves the representation of its heroes to be not just larger than life but stupendously, awesomely bigger than anything else. If blue whales built statues to each other they'd be smaller than these." (Simon Hoggart)

In the 1920s plans were made to carve the figures of America's greatest presidents into Mount Rushmore, the tallest spot in the Black Hills of the Dakotas, and by 1939 the faces of George Washington, Thomas Jefferson, Abraham Lincoln, and Theodore Roosevelt had been carved into the rock. With that, one of America's greatest national monuments was born.

The four men were certainly worthy of being immortalized in granite, and Mount Rushmore poignantly symbolizes the legacies and legends of the four presidents (which often overshadow the actual men themselves). Every American is taught a pristine narrative of the life and legacy of George Washington and can easily recite the highlights and myths of his life. Thomas Jefferson was instrumental in authoring the Declaration of Independence, laying out the ideological groundwork of the notion of states' rights, leading one of the first political parties, and overseeing the expansion of the United States during his presidency. Schoolchildren can recite the life story of Lincoln, the Westerner who educated himself and became a self-made man, rising from lawyer to leader of the new Republican Party before becoming the 16th president of the United States and saving the Union. And at the turn of the 20th century, Theodore Roosevelt came to be recognized as the quintessential American, remembered for being a president, an explorer, a hunter, an author, a soldier, a president, and a safari adventurer, all of which combine into one unique reputation.

What listeners say about Mount Rushmore