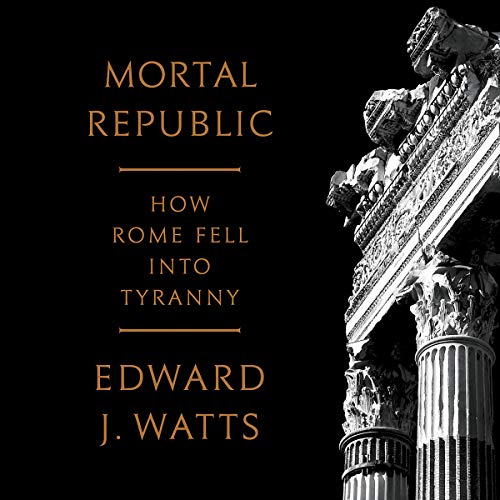 By: Edward J. Watts
Narrated by: Matt Kugler
Free with a 30-day trial

A new history of the Roman Republic and its collapse

In Mortal Republic, prize-winning historian Edward J. Watts offers a new history of the fall of the Roman Republic that explains why Rome exchanged freedom for autocracy. For centuries, even as Rome grew into the Mediterranean's premier military and political power, its governing institutions, parliamentary rules, and political customs successfully fostered negotiation and compromise. By the 130s BC, however, Rome's leaders increasingly used these same tools to cynically pursue individual gain and obstruct their opponents. As the center decayed and dysfunction grew, arguments between politicians gave way to political violence in the streets. The stage was set for destructive civil wars - and ultimately the imperial reign of Augustus.

The death of Rome's Republic was not inevitable. In Mortal Republic, Watts shows it died because it was allowed to, from thousands of small wounds inflicted by Romans who assumed that it would last forever.

What listeners say about Mortal Republic

This an excellent summary of Rome’s transition from Republic to an autocratic empire in a period of three centuries. And the lessons that history holds for us. .

Despite my interest in the subject and the timeliness of the book's release, I could not get through the whole thing.

The author, rather than crafting an engaging story that draws the reader in, instead puts forth a chronilogical account of events, void of human /!emotional connection or artful atorytelling.

I hope to find a more engaging book on this subject.

This is the equivalent of a survey plus course - concerning the Roman Republic.

It was written with at least one eye on recent (geo)political events/attitudes/gestault - because words such as populism/autocracy/"reduction of political norms" abound.

Bottom Line: The history seems to indicate that over time - there was a "loosening" of the Political Norms and process models within the Roman Republic - from the time and behavior of Marius - down to Caesar, Octavian, and the others. Then, as now - it is not only "what was done" - but the "politics and political messaging/positioning" that certain representatives of certain Roman families did as they competed for power.

In the end after a series of Civil Wars - Octavian wound up "the winner" - but he constructed a governance model for a large empire - gives roles to the Senate - but he (Emperor) was the indispensable individual.

Relevant for today - not just in the United States but in other budding autocracies (Russia, China, Hungary the Philippines) - will the other branches of political power - "stand up" to autocratic instincts - if not them - the people need to act - else the institutions may give way to a budding autocracy.

Great history - with great relevance for today - should be of interest to those who study Roman history.

What a waste of my time

I read an article on Forbes where business leaders listed the books they were currently reading. One of them recommended this book. I’ll never respect that business leader again. I got about 5 minutes into this book before I realized that the entire premise of this book is that Trump is destroying America. We get it! There’s no need to spend an entire book trying to prove that. I thought this book would teach me about Rome, not about how Trump is bad for America. Yawn.

Dense and dramatic, this is an excellent introduction to the Republic's last century. All the main personalities are here, and the story weaves individual and structural causes fairly well. Very well-read.

Superb hiatory of the Roman Republic

Excellent history with lessons for today

An excellent account of the long and painful death of the Roman Republic, with (mostly unobtrusive, except at the beginning and end) lessons for today - and I think those lessons can be taken to heart by people of any political persuasion. (It's also instructive to remember that the Founders consciously used Rome as a model for the fledgling American republic.)

"Sulla, Marius, Caesar, and Augustus all inflicted mighty blows on the republic, but its death was caused as much by the thousands of small injuries inflicted by Romans who did not think it could really die. When citizens take the health and durability of their republic for granted, that republic is at risk. This was as true in 133 BC or 82 BC or 44 BC as it is in AD 2018. In ancient Rome and in the modern world, a republic is a thing to be cherished, protected, and respected. If it falls, an uncertain, dangerous, and destructive future lies on the other side."

It’s perhaps unfair of me to suggest this book lacks any real insight or analyses - although I struggle to recall any evidence to the contrary - if only because the narration is so bloodless that it turns every sentence into plaster. It’s just sort of spackled on. The narrator may be a wonderful person, maybe a charming dinner guest, who knows, but he doesn’t seem to have any interest in the text, here. I can’t say as I blame him - it’s workmanlike at best. There are plenty of other books on this topic and I recommend you listen to one of them instead.

Rome: from Republic to Autocracy

If you love Roman history, and see history as the fundamental source of information to understad who we are and what we do as humans, this book is for you. This is a detailed account of the slow and inexorable fall of the successful Roman Republic into autocracy. Extremely relevant read these days, a must read for politicians.

If you are a detail person, requiring a book written in a compelling narrative, this is it.

I’ll read this again in about a year. Know that I’ll get more out of it on the second reading.

Not just a chronology but reasons

I am no novice on the Roman Republic and its demise but despite some repitition, I found this book engaging and the author has provided an insight into and a rationale for events that was plausible and illuminating. As always a secondary source may miss the mark but this is certainly worthy of an assessment.