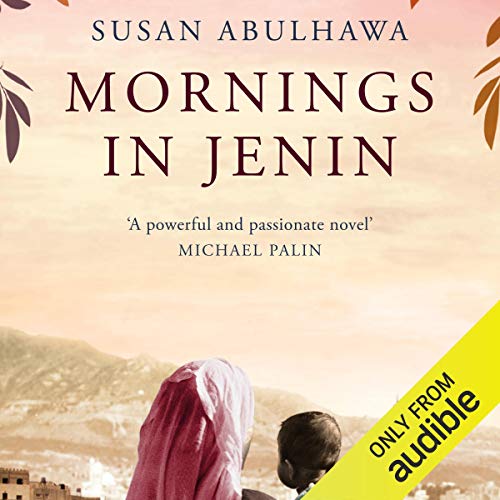 By: Susan Abulhawa
Narrated by: Jennifer Woodward
Try for $0.00

Mornings in Jenin is a multigenerational story about a Palestinian family.

Forcibly removed from the olive-farming village of Ein Hod by the newly formed state of Israel in 1948, the Abulhejos are displaced to live in canvas tents in the Jenin refugee camp. We follow the Abulhejo family as they live through a half century of violent history. Amid the loss and fear, hatred and pain, as their tents are replaced by more forebodingly permanent cinderblock huts, there is always the waiting, waiting to return to a lost home.

The novel's voice is that of Amal, the granddaughter of the old village patriarch, a bright, sensitive girl who makes it out of the camps only to return years later, to marry and bear a child. Through her eyes, with her evolving vision, we get the story of her brothers, one who is kidnapped to be raised Jewish, one who will end with bombs strapped to his middle. But of the many interwoven stories stretching backward and forward in time, none is more important than Amal's own. Her story is one of love and loss, of childhood and marriage and parenthood, and finally of the need to share her history with her daughter, to preserve the greatest love she has.

Set against one of the 20th century's most intractable political conflicts, Mornings in Jenin is a deeply human novel - a novel of history, identity, friendship, love, terrorism, surrender, courage, and hope. Its power forces us to take a fresh look at one of the defining conflicts of our lifetimes.

What listeners say about Mornings in Jenin

This is a beautifully written and compelling story. As someone who is familiar with the Arabic language, I found the narrator's pronunciation of names and places disappointing. It would have been better to have someone who had a better command of either Arabic or Hebrew.

Would you listen to Mornings in Jenin again? Why?

Yes! Woodward's voice was not annoying, and I enjoyed her reading. This is the kind of book where you miss a few things the first time, so I would actually listen to it again to take note of the things I missed.

The relationships were so fantastically captured. I could identify with them even when I didn't have much in common with some characters.

What does Jennifer Woodward bring to the story that you wouldn’t experience if you just read the book?

I liked her accenting of the different POVs. I also presume that her pronunciation of Arabic terms is correct (it sounds correct); whereas if I read it I might have just skimmed over the Arabic terms. I also like that Woodward becomes passionate when Amaal is passionate. This is not an apathetic book, and so the narrator must not be apathetic either.

It made me laugh a few times, because some of the characters say funny things. And it made me smile warmly at some of the family/friend relationships. But mostly it made me cry many many times; not only because the tragedies were so great, but because I know they are based on reality.

I thought I knew a fare bit about the Israel-Palestine conflict, and that I was quite open-minded, but this book taught me so much more. I am glad I listened to it. It was heart-breaking, but I don't regret it. I only regret that humans do such horrid things to one another.

People need this hear this

I don’t know where to start, I just finished it and I wonder why it has not gained more popularity. The poetic and emotional story of Amal will forever resonate in my thoughts. It’s funny that whenever hearing this story you very often blur the lines of fiction and wonder if it’s real. As an American we don’t often hear this perspective and we often distance ourselves from this tragic history but the author gives voices to a people we wouldn’t normally care about. Get the audiobook, you won’t regret it.

you won't see Israel the same after this book

had a little trouble starting this book. the narrator puts LOTS of emotion in her reading. I got used to after first hour. all her male characters sound the same. but the story really makes you think. I did a bit of research after reading to check if her battles were real or not. It's pretty accurate. I really had no idea any of this stuff took place. our western culture portrays Israel as the good guys and innocent victims. and Palestinians as terrorists. it was very eye opening reading the story from a Palestinian point of view. every American should read this. well done.

This is an amazing story and I truly loved it, and it makes me sad that I have to review based on the narrator. It’s absurd that they would pick someone who can’t pronounce even bare minimum words that are key to the story. Even the words “Muslim” and “Islam” are mispronounced - the most basic research would have solved that. It sincerely made it challenging to get into the story at times strictly because of the narrator’s pronunciation. Many times it took me out of the story. Beyond that, her enunciation was also strange - way too sing songy but in a way that didn’t suit the phrases she was reading. Really disappointed they didn’t put more thought into selecting a narrator who could do this book justice.

I have read thousands of books in my lifetime. This is perhaps the most exquisite. I feel changed. Highly, highly recommend.

the most amazing performance

I've never read or listened to a more poetic book, and it was read so beautifully in this version. Unforgettable.

Educational, sad, and maddening truth about the conflict in Palestine/Israel. Hard to listen to but necessary to understand what has happened and continues to happen today.

I enjoyed listening to the book, however it could’ve been much more enjoyable if an Arabic speaker was narrating. The pronunciation of certain Arabic phrases sounded heavy and forced.

Palestinian view of the occupation of the WestBank

This is a multigenerational story of a Palestinian family from the West Bank dating to the foundation of Israel in 1948 with some interesting twists in the story. It is a useful fictional account of a family in the original Palestinian villages moving through displaced persons camps, massacres, civil war, intifadas, resettlement in America, and loss of family members to snipers and bulldozers. It is one-sided and biased from the outset which is understandable because it is fiction but tells a compelling story from the Palestinian point of view. It is a little too smarmy for me with too many passages from "The Prophet" read at daybreak overlooking ancient olive groves and kisses of children, but that's just me. It was useful to understand the Palestinian perspective.

The narration is hideous!!

Wonderful story, hideous narration. I returned this and bought the physical book. The book is excellent but I kept cringing the whole time I was listening to the audiobook. I tried to persevere but had to return this after a few chapters. Such a shame as it could be incredible with a good narrator.

narration let's it down so much

I nearly stopped listening in the first hour or so because of the narrator. She absolutely butchered every Arabic word in the book. The phrases made me cringe and cry out many times in disbelief at such horrible pronunciation. I'm not an Arabic speaker although Muslim so I do know when common islamic words are not said correctly. It would not have taken much work to learn how to say the names and titles she had to use over and over again. It really marred the book for me and I wish I could have read it in print instead but circumstances at the moment don't allow that. It showed to me that the narrator and Audible didn't care enough about this poignant story to give it a decent narration.
The book itself is both lovely and so difficult. I am quite aware of the Palestinian struggle and what those poor people endure, yet at times I had to pause to compose myself and not break down sobbing. The writing at times reminds of Khaled Hoessini which is a massive plus.

The persistent change of perspective and tense was irritating at first, but the novel spans 3 generations of love, war, and everything in between. At times, it's harrowing in the wake of death, but it's lifted by moments of vivid tenderness that took my breath away.

a must read to enable understanding...

how are these narrators a selected? At least have the respect to pronounce the Arabic correctly. A great book otherwise... if you can overlook the very bad pronunciation of Arabic

The story is brilliant, the narrator is very bad

The narrator is suffering in pronouncing every name. How hard is to practice saying names.
You had one job and you ruin it

it has filled my thoughts for days.. thank you for writing these truths for the world to understand how Palestinians have been persecuted in the formation of Israel and ever since.
You get used to the narration so stick with it.. .

Beautifully tragic and thought provoking. Agony at times. Wonderful description of the lost lands and hurt. Feels far too forgotten.

What a thought provoking and moving story which forces the listener to reevaluate their views of what the press tells us and how we should view world issues. One person’s terrorist is another person’s freedom fighter.