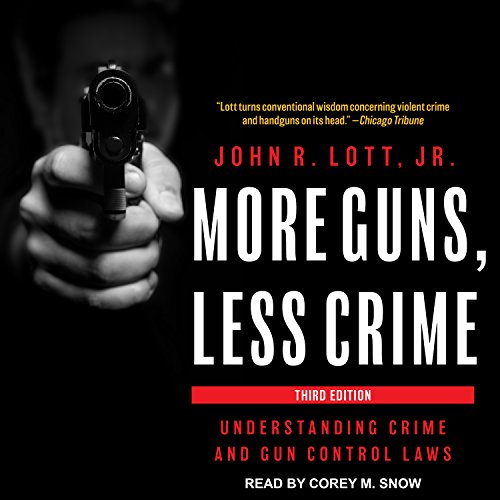 On its initial publication in 1998, John R. Lott's More Guns, Less Crime drew both lavish praise and heated criticism. More than a decade later, it continues to play a key role in ongoing arguments over gun-control laws: Despite all the attacks by gun-control advocates, no one has ever been able to refute Lott's simple, startling conclusion that more guns mean less crime. Relying on the most rigorously comprehensive data analysis ever conducted on crime statistics and right-to-carry laws, the book directly challenges common perceptions about the relationship of guns, crime, and violence. For this third edition, Lott draws on an additional 10 years of data - including provocative analysis of the effects of gun bans in Chicago and Washington, DC - that brings the book fully up to date and further bolsters its central contention.

"An intriguing and shocking look at crime, guns, and gun control policy." ( Kirkus)

as someone who always considered themselves anti gun, I was surprised how my viewpoint started to change throughout the book. there are times he talks waaaay too much on how persecuted he was but the data points are very compelling.

the facts and endless statistics from this book will be priceless as we face a seemingly endless assault against out rights in Oregon during the 2019 legislative session.

fantastic book. he definitely puts the numbers behind what you would think is common sense knowledge.

Essential data for 2A supporters

John Law provides essential arguments and data for 2nd Amendment supporters. This is a very thorough, evidence-based analysis of the effect of gun ownership in America.

Every question is answered concerning gun control. He answers all the critics with facts, analysis and data. It doesn't read like a novel but if you want facts not emotional propaganda this is the book.

Good to listen better to read

The book was good to listen to but would be better to read given they reference data, diagrams and charts. While they describe and provide the analysis -- a picture is far more valuable and easy to grasp.

indispensable, but also highly technical. The methodology is detailed for those who are really interested

The overall performance was awesome.
The update in information was impressive and appreciated. My only complaint is that An accompanying PDF with all of the graphs needs be present. however it isn't the end of the world.
it is data, so be warned its dry. if you aren't interested in the topic nor into statistical papers then its not for you. move on~

q this book is like a research document or paper so it's very factual and can be dry at times. but it has a lot of good facts lot of good statistics and a great point made

Very much enjoyed the book. I am definitely recommending this to friends. Narrator did a good job. I ended the book with several more counterpoints to opponents to the conclusions presented in this book.

The book contains a lot of statistics to back the claims, the revised version only adds weight to the thesis.